The pic shows off co-star Adam Levine standing beside an aged brick wall in what appears to be some type of underground corridor. The weirdest part? A creepy red graffiti face on the wall with the words "Bloody Face" scrawled below it. 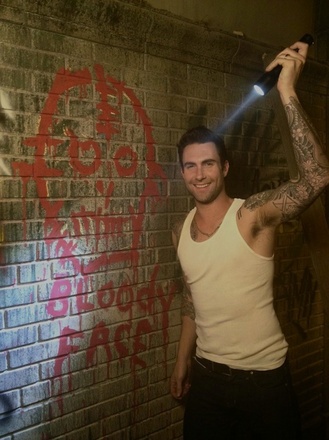 What does it mean? We have no idea. But, for what it's worth, here is Murphy's tweet for reference:

"AHS exclusive: Two of our stars who started shooting today - - the multi-talented @adamlevine and Bloody Face!"

Season two premieres this fall (likely October) and will be set at an insane asylum in the 1960s. Levine plays half of a couple dubbed "The Lovers," along with recent addition Jenna Dewan.

What's your take on our first peek behind the scenes of season two?