Scientists adopted the "Hobbit" name a few years ago to identify a short, big-footed race of humans dubbed Homo floresiensis—and now a facial reconstruction finally shows us what they looked like. Want to meet your average, real-life lady from Hobbiton?

A mostly intact female skeleton of a 17,000-year-old "Hobbit" was found on the Flores island in Indonesia, and scientists have spent the last little while re-creating what the little lady would've looked like. The skeleton stands approximately 1 meter tall, with a brain about one-third the size of a modern-day human. The woman weighed approximately 66-77 pounds.

Scientists say the now-extinct evolutionary offshoot may be a branch from the 1.8-million-year-old Homo erectus, but more comparable to modern humans.

Anthropologist Susan Hayes, who produced the mockup, had this to say about the final reveal:

"She's not what you'd call pretty, but she is definitely distinctive... She's taken me a bit longer than I'd anticipated, has caused more than a few headaches along the way, but I'm pleased with both the methodological development and the final results."

Check out the graphical process from skeleton to face in the pic below (click for larger): 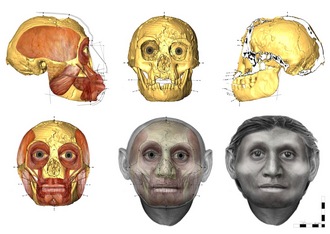