Brad Wright, the co-creator of Syfy's upcoming Stargate Universe, told a Comic-Con audience that the show got not only an actor in the person of star David Blue, but also a technical adviser: Blue—who plays Eli, a genius slacker—has been a fan of the franchise from the beginning and has seen every episode of Stargate SG-1 and Stargate Atlantis.

"Our first day of weapons training, actually, we did it on the Atlantis set, in front of the Atlantis gate," Blue told us in an exclusive interview, adding: "It's hard when your castmates were not as huge fans beforehand, because you can't geek out in front of them without feeling like an idiot. I kind of had to wait for lunch, when everyone walked away, and go to the Stargate and touch it and take pictures of myself in front of it."

The Stargate franchise is the plucky sci-fi adventure we could all use right now
Michael Shanks dishes Stargate Universe, other projects

Blue added, "I love any scene the Stargate is in. ... When you see on Eli's face that he's really excited about the gate, that's actually me. ... I keep telling people that this place seems far too real, and the place is so cool, there's no way we're not government-funded. It's just to throw people off the scent that this actually exists. ... Somewhere up there, there are people on spaceships, and they're going through Stargates, and these things are actually happening."

SGU, from Wright and Robert C. Cooper, follows a band of soldiers, scientists and civilians who must fend for themselves as they are forced through a Stargate when their hidden base comes under attack. The desperate survivors emerge aboard an Ancient ship, the Destiny, which is locked on an unknown course and unable to return to Earth. Faced with meeting the most basic needs of food, water and air, the group must unlock the secrets of the ship's Stargate to survive. The danger, adventure and hope they find on board the Destiny will reveal the heroes and villains among them.

"Stargate Universe takes place in the same world and the same universe as SG-1 and Atlantis, but essentially it's a group of people who are brought on to do some research," Blue said. "Scientists brought in to figure out this mythical ninth chevron address, ... a nine-digit phone number, and nobody knows where it goes. And through a course of events, [he] ends up having to pick up and go, and the right people who are supposed to go on this mission to explore don't necessarily end up going." 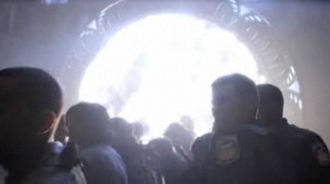 Blue added: "You end up with a group of people who weren't supposed to be there, ... counting on each other, who aren't necessarily the ones with the skill sets for survival ... on the far side of the universe, trying to figure out how to survive. How to not die. How to not kill each other. And genuinely having to deal and cope."

The show differs from previous installments in the popular franchise. "Unlike past shows, where you have rubber-faced, British-speaking aliens, it's more about the ensemble cast," Blue said. "The people you become invested in. Who you get to relate to and find catharsis in, ... it's great, because you can see all these new layers and levels to situations you normally get the chance [to see] in shows these days."

SGU has been described as darker in tone then its predecessors, but Blue has a different way of looking at it. "I tend to say it's not as much darker as it is more real," he said. "And maybe that's a pessimistic way of looking at the world, but I think that ... reality itself is darker. It's not just shiny, 'Hey, we survived again! Woo-hoo!' There are more levels, where you look at the person sitting next to you, and you start thinking to yourself, 'Do I trust them today?' And you look at someone sitting next to you and start to see a spark and go, 'How do I really feel about that person?' And when your life is being threatened, you tend to actually, in a weird way, find humor to make yourself cope. You can say 'darker,' because in some ways it is, ... but when you really get down to it, it's like everyday life. That's kind of what I like about it."

Blue said the show is part of a greater trend in television for shows to reflect the world around them. "Look at reality shows," he said. "They want to feel like they're a fly on the wall, watching a situation happen. So when you can do that with something that's also sci-fi-related, I think it's even cooler for the fans. Because it makes you feel more like the gate actually exists. Like it's Wormhole Extreme, and these people are going to come and kidnap you any minute because they need your help."

When I told him that I'd certainly be OK with that, he laughed and said, "Me too! And it happened! I'm actually calling you from a real spaceship."

At Comic-Con, the show's creators told the audience that viewers of SGU don't have to be familiar with the earlier shows to watch. Blue agreed. "I think it's great, because the truth is, a lot of my friends and family do not watch a lot of sci-fi, or specifically Stargate," he said. "They keep asking me, 'Should I watch it all?' And I say, 'Feel free to.' It's almost like easter eggs. But the truth is, you don't need to. That's one of the things I really love about Eli, my character. I'm there to be the audience. I'm there to be the heart and the eyes and the ears of the audience who are thrust into this situation they weren't expecting to be in and have to go, 'Whoa, whoa, whoa! What are the Ancients?' And have it explained to them."

But loyal fans will find plenty of references to earlier series, with familiar guest stars, inside jokes and "little tidbits" of information, Blue promised. "You can feel special on that note," he said. "I hate to make this reference, but for some reason it's sticking out. It's kind of like The Muppets. You know how as a kid you watch, and you think it's great and funny? ... And then you grow up and watch and you go, 'Oh, that's a lot dirtier than I thought it was?' It's kind of like that."

Stargate Universe debuts Oct. 2 with a two-hour premiere at 9 p.m. ET/PT; it will air Fridays at 9 on Syfy