Meet the girls who kick ass in G.I. Joe

They really could call it G.I. Joan.

Female characters in military-action-fantasy films are often second-class citizens, reduced to serving as eye candy and standing on the sidelines while the guys handle the heroics and/or the villainy, but that ain't the case with G.I. Joe: The Rise of Cobra. Yes, the guys figure prominently, but the ladies are the guys' equals in every way.

Who wanted to star in G.I. Joe, who didn't and why
Sienna Miller hams it up as the Baroness in G.I. Joe

What are we talking about here? Well, in the movie, which opens Friday, Sienna Miller (Stardust) plays Ana, better known as the butt-kicking, duplicitous baddie the Baroness. Rachel Nichols (Star Trek, Alias) is one of the protagonists, Scarlett, who's both book-brilliant and a martial-arts master. They fight everyone and anyone and, of course, each other.

"That's what really appealed to me about the script, was the fact these women hold their own," Miller said in an exclusive joint interview with Nichols on Saturday in New York. "I imagined, like [many people will], that they'd probably just be the eye candy, and instead they're fully developed, they both have arcs. They're strong, and they're good fighters."

Nichols nodded in agreement. "Yeah, we can play with the boys," she said. "We can go toe to toe with them. We can prove that G.I. Joe is not just for boys, obviously. That was great. It's always nice to see [that]." 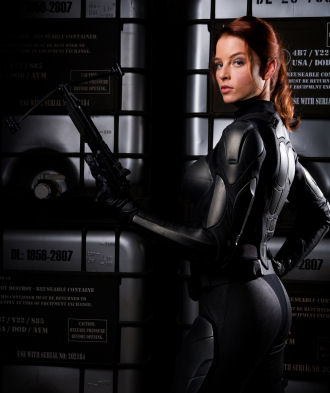 Much of G.I. Joe was shot on green screens, with the effects added in later. As a result, Miller and Nicholas said that seeing the completed film for the first time was an eye-opening experience.

"We all saw the film for the first time in Australia, at the beginning of the press tour," Nichols said. "When you're making a film with CG, even though a lot of it is actually live-action, you really have to trust your director. When he said, 'This is what it's going to look like in the final product,' you just have to sort of go with the flow and agree. [Director] Stephen [Sommers] really, I think, went above and beyond and exceeded all expectations."

Miller added, "Yeah, we really loved it. We were cheering. It was really funny, because it was just the cast watching it, and Marlon [Wayans] came on, and we were like, 'Whoooo!' And with Channing [Tatum], we were like, 'Yeah!' and screaming the whole way through and laughing at things, little in jokes. But it was so much fun. I think it's a great film."