Michael Chiklis: My 'ass-backwards' path to No Ordinary Family

These days, Emmy Award-winning actor Michael Chiklis doesn't mind getting hoisted up 110 feet in the air and dropped or getting run over by a van multiple times. In fact, he's thrilled about his new role as the father of a normal family that becomes superpowered when their plane crashes in the Amazon on ABC's No Ordinary Family.

"It is such a refreshing change, after seven years of being on the verge of an aneurysm," joked Chiklis, who only a couple years ago played the intense Detective Vic Mackey on The Shield, a role for which he won an Emmy and a Golden Globe. "It is nice to go to work and laugh and be light and deal with a completely different tone of work and material. I love the fact that I'm doing something that I can sit with my family and really enjoy [watching]."

Chiklis feels that No Ordinary Family is a hybrid of three different "tried and true" genres. "The family show, the police procedural and the superhero show, and that's never been done. Sure, there are comparisons to be made with a number of different shows, but nothing has been done with this cross-section of different genres. So it ends up being its own thing," he said.

As for the characters, their powers are "reflective of what they feel they are lacking individually. For example, my character, I feel that I haven't been a strong enough father, husband and provider. So I get super strength," said Chiklis. "My wife feels like she doesn't have enough time in the day, because she's been very successful with her career. She's been failing as a wife and a mother, so she gets super speed. So she can literally be at all places at all times. My daughter, for example, has been so self-absorbed that she hasn't been able to read into people at all, so she becomes a clairvoyant. And my son is about to be placed in remedial classes and has real low self-esteem in terms of his intelligence, and he becomes a super genius. So it's kind of a cool tie-in to the 'why they got what they got.'" 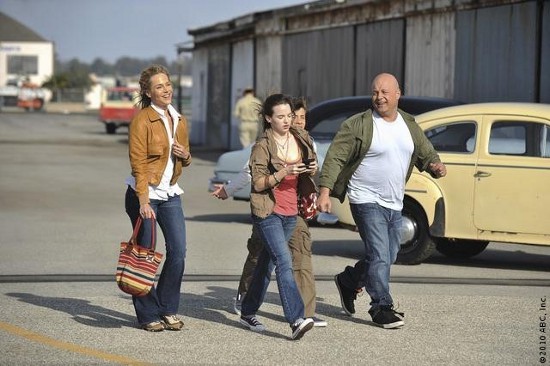 The police procedural/superhero aspect of the series will lead Chiklis' character, who is a police sketch artist, to battle crime and sometimes fight normal bad guys and other times take on superpowered villains. Hence the acting challenge of getting lifted up in the air 110 feet and dropped, and getting run over by a van a bunch of times.

"The superhero aspect of the show just really makes it fun and gives us a larger canvas and bigger palette to paint with in the context of a family show. But at its core, it really is a family show," said Chiklis.

His character, Jim Powers, is the most like Chiklis of any character he's played, he said. "I am so used to being able to slip into other people's skin and, in a way, hiding in that skin. But this is sort of who I am in a lot of different ways. I am a husband. I'm a father of two. I care deeply about my friends and family, and I have my ups and my downs just like everybody else. You try to pick your way through this life and navigate it the way you can be proud of at the end of the day. And we all have that to relate to about the show."

The actor admits that his career has been "sort of ass-backwards in a lot of ways. ... When I was in my late 20s I was playing a roly-poly, affable, 40-something police commissioner. And now I'm in my mid-40s [and] I'm playing a superhero, which is both flattering and incredibly challenging at the same time." In between those roles he starred in his critically acclaimed role in The Shield and he played Ben Grimm (aka the Thing) in the Fantastic Four movies.

One thing that impresses the actor is the special effects that they are able to pull off with No Ordinary Family.

"Even as early as a few years ago, when I made the Silver Surfer movie, a show like this just wouldn't be possible, because the technology didn't exist where you could do this this quickly. This was formerly only the purview of big features. If you look at the scope and the gags that we do on the pilot, it is a superhero movie. We have about 10 percent of the budget and the time of a feature film. When you look at feature films like the Fantastic Four, that's five months and $100 million," he said.

Here's a preview of No Ordinary Family:

Will you be watching Michael Chiklis play superdad tonight?