Did the big Lost finale last May answer all your questions? If not, more answers are coming your way, said actor Michael Emerson, who played Benjamin Linus on the ABC series.

No, we're not talking about a Lost movie, which Emerson said would be "probably impossible." Instead the answers come by way of the Lost: The Complete Sixth and Final Season DVD and Blu-ray set, through a bonus feature called "The New Man in Charge." It stars Emerson and Jorge Garcia, who played Hurley on the series. The featurette touches on polar bears, the Dharma supply drops, pregnancy issues and what happened to Walt (Malcolm David Kelley).

"I think the chapter is a nice addition to the Lost narrative—nice to have some of the more particular or practical questions answered, since the finale took a more spiritual tone," said Emerson during a virtual roundtable with journalists.

The set is stuffed with additional bonus features and will be released tomorrow, along with the Lost: The Complete Collection DVD and Blu-ray collection.

Emerson doesn't have any complaints these days when it comes to the journey Ben ended up on. "I loved the entire arc and was especially delighted with Ben's end in the finale. It was finer and more satisfying than anything I could have imagined," he said.

"I think what's perfect about the Ben storyline is that we are never certain where he falls on the scale of good and evil. It's a tribute to the skill of the writers that the audience could never be certain about Ben, even to the very end," said Emerson. When it comes to closure and the conflicted Ben, "I'm actually more interested in moments of un-closure, like Ben's end in the finale," said Emerson, referencing the fact that Ben decided not to head off to the afterlife with the other Losties when the story came to an end after six seasons.

He admits he's "completely satisfied with Ben's adventure. Of course, there are always the 'paths not followed,' which are tantalizing. It would have been interesting to explore the relationship between Ben and Annie," continued Emerson. Annie was Ben's childhood friend. 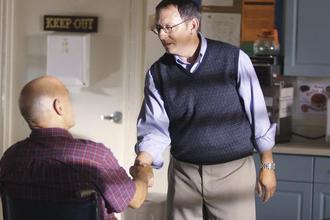 As for what he'll remember most about his Lost experience, "Landscape, camaraderie, rainbows and taking some beatings," said Emerson. "I'm still trying to absorb this adventure that I've been on. I don't expect it will ever be duplicated in my life. The almost accidental way I got the role and the unbelievable reach of the series are reminders to me that you can never know where a job will lead you. I will treasure this experience even as I move on into my post-Lost life. ..."

As for that post-Lost life, first up for Emerson is a trip to the Emmy Awards next Sunday, where he's been nominated for outstanding supporting actor for his role as Ben. Emerson has won two Emmy Awards already, one in 2001 for The Practice and his second last year for playing Ben on Lost. Beyond that, Emerson said, "One of my new responsibilities is to make sure I'm not trapped in this role forever. I'm looking for a real change of pace."

Are you having Lost withdrawal pains and ready for the DVDs and Blu-rays?