Ullerup (the late Ashley from Sanctuary), plays "Aliza," a revolutionary and companion.

Mack (who plays Chloe on the CW show) will play a character named Marlise, an ambitious member of the Sect.

Juliani (Gaeta from Battlestar Galactica) plays "Garin," an officer of the resistance and a comrade of Rand. 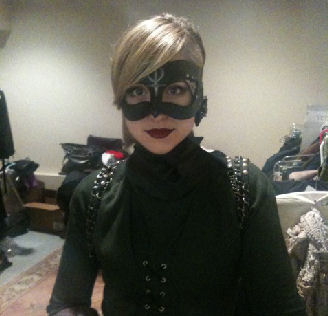 Allison Mack in her Riese costume

Here's the official description of the series:

"Riese, a seemingly random wanderer, is being hunted by a terrifying religious cult, The Sect. Traveling from nation to nation for years, she is accompanied only by a wolf, Fenrir. Together they must evade the assassins sent by the Sect--who'll stop at nothing to complete the task they failed to achieve many years ago.

"Her past is shrouded in mystery, as even Riese can't recall the events of the tragic night when her entire family was slaughtered and she was forced to flee into the wilderness. On her journey, she'll piece together her past, and her destiny, in a conflict that will hold the fate of the world in the balance--and the once peaceful kingdom of Eleysia will be the battlefield."

It's available on the official site and on YouTube. Check out the trailer below.