MoMA unveils 'Tim Burton' exhibit plans, and Burton is there

It's been said that Tim Burton's films—OK, maybe not Planet of the Apes—are like pieces of art, and Burton is also known for his colorful doodles, so it's perfectly appropriate that he'll be celebrated with an upcoming exhibit at the Museum of Modern Art in New York.

Set to run from Nov. 22 through April 26, 2010, "Tim Burton" will span the filmmaker's life, from his youth in Burbank, Calif., to his early work at Disney to the upcoming feature film Alice in Wonderland. Attendees can expect to see 700-plus pieces on display, including maquettes, storyboards, previously unseen drawings, scripts, costumes and puppets, as well as retrospective screenings of Burton's shorts and films and also showings of films that inspired Burton. The exhibition is sponsored by Syfy.

Burton—clearly humbled and jazzed—attended a press briefing yesterday at MoMA. Those on hand watched a slideshow of pieces to be included in the exhibit and clips from several films, among them Mars Attacks!; Doctor of Doom, a 1980 black-and-white short starring, written and directed by Burton; and Hansel and Gretel, the filmmaker's long-lost live-action adaptation of the Grimm story, which originally aired as a Disney Channel special.

"Dating back now, really, to the beginnings of the museum, to 1929, when we opened 'Georges Melies: A Film Pioneer,' MoMA has had distinguished gallery installations on the art and artists of the cinema," Glenn Lowry, director of MoMA, said during his opening remarks. "In the years following our first retrospective of a filmmaker, the museum has been the site of over 80 exhibitions of works of film studios and filmmakers, such as D.W. Griffith, Alfred Hitchcock, Pier Paolo Pasolini, Roberto Rossellini, Ernie Gehr, John and Faith Hubley and David O. Selznick, among many others. 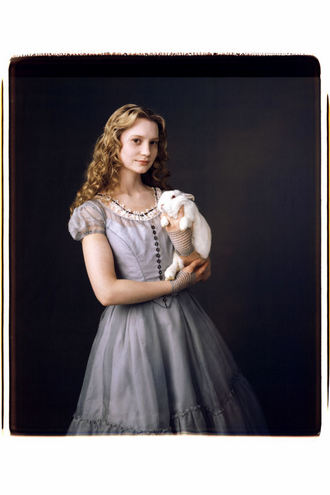 "And with 'Tim Burton,' we put on our largest-yet, most comprehensive monographic show to date on a filmmaker who has distinguished himself internationally as among the foremost auteur voices of his time," Lowry continued, adding: "The gallery exhibition will provide access to personal, virtually unknown work that Burton has kept to himself until now. We are extremely fortunate that in addition to being a director, producer, artist, photographer, author, collector and pop-culture enthusiast, Tim Burton is also a remarkable archivist and has held onto virtually everything from his career. We are honored to be the first institution to introduce the majority of these works to the public."

Following his remarks, Lowry introduced Ron Magliozzi, the MoMA film department curator who led the team that worked with Burton on the exhibition. Lowry introduced the clips from Doctor of Doom and Hansel and Gretel and then introduced Burton, who spoke briefly before answering questions from the audience.

"It's hard to imagine that on the Disney Channel," Burton joked of Hansel and Gretel upon stepping up to the microphone. "I think they showed it once at 3 a.m. on Halloween night. I just want to say thank you and thank Ron and everybody here for making it such an amazing experience for me. It's such a surreal thing to me. A lot of this stuff was just for projects and [part of] the thought process. I hadn't really gone back and looked at all this stuff [until] Ron came, so it was a really interesting thing for me to go back. I thought I'd left certain images [behind] a long time ago, but then you realize that you're still obsessed by certain things. It's just been a real re-energizing thing for me, and I'm very honored and appreciative to have this ... whatever you want to call it. Thank you."

During the Q&A, Burton noted that he could see bits of Sweeney Todd in Doctor of Doom and nuggets of Batman imagery in Hansel and Gretel. Sharing one particularly amusing anecdote, he joked that he wasn't exactly immersed in a museum culture as a kid, that his first museum experience was the Hollywood Wax Museum and that he "probably got more out of The Beverly Hillbillies than Monet."