A new international trailer for the upcoming alien invasion flick Battleship literally brings us eye to eye with one of the bad guys.

The teaser trailer that popped up online today, apparently originating in France, offers up a lot of the footage we've already seen in various American teasers and TV spots. But there are a couple of quick glimpses of more action (as if this thing doesn't look like it's bursting at the seams with action already) and one shot of a very malicious-looking alien eye.

Battleship director says he's finally figured out why it was a massive flop
Astronomer: 6 reasons why aliens would NEVER invade Earth

Until now, all we've seen of the aliens are their spacesuits/armor, so this is our first glimpse of what's lurking inside.

As for the rest, well, the teaser sets up the rather perfunctory-looking "character" material (bad boy naval officer Taylor Kitsch is about to get drummed out, Liam Neeson is his commanding officer and the father of Kitsch's scorching-hot squeeze, Brooklyn Decker) before getting to the spectacular navy-vs.-the-aliens scenes that director Peter Berg knows will be this film's bread and butter. 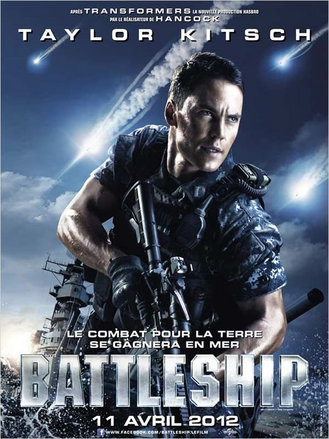 An international poster for the movie has also arrived, putting Mr. Kitsch—who we'll also see in the title role of John Carter in a few weeks—front and center.

And if you think this looks more than a little like Transformers at Sea, well, it is based on another Hasbro product, and Transformers 4 won't be ready for another two years ...