More from Cameron on that underwater Avatar sequel

We've all been wondering what James Cameron has in store for a sequel to the biggest movie of all time, Avatar, which would explore the oceans of Pandora, and now he's saying that he's already got the tools he needs to create an undersea version of the fantastical planet.

"Oh sure, that's no problem," Cameron said in a group interview on Earth Day Thursday in Los Angeles. "The CG now is so mature we can do anything."

A marine setting is only one of the new aspects James Cameron plans to introduce in an Avatar sequel: He also promises to explore environmental themes farther and add new creatures.

"I think that thematically and in terms of content with respect to action and emotion and cool new creatures and all that, I want the next film to be better than the last one," Cameron said. "We've got all the digital assets. We've got the jungles, the mountain, the spaceships and all that. Now we're going to create a whole bunch of new stuff."

A second Avatar movie is still speculative, and 20th Century Fox has not yet made deals with Cameron or the actors for a sequel. But Fox Film Entertainment co-chairman and chief executive officer Tom Rothman said that he is confident that everything will work out.

As if a little thing like money could stop a sequel to the highest grossing movie of all time? "Look, Avatar 2 is going to get made," Cameron said. "It's a question of is it the next film or is there something else in between. I haven't made that decision yet."

Cameron spoke at a ceremony in which he helped plant a tree on the 20th Century Fox lot as a part of the Home Tree Initiative to plant 1 million trees by the end of 2010, joined by Avatar producer Jon Landau, actor CCH Pounder and Fox executives, to coincide with the release of Avatar on DVD and Blu-ray today. 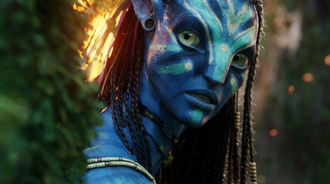 To get an idea of what his underwater vision might look like, Cameron pointed to a scene from Avatar that hints at where he's going. "There are a couple of water scenes in the film, one in particular where he goes into the river, turbulent rapids and all that," Cameron said. "If we can do that, we can do anything. That was a tough scene."

Producer Landau shares Cameron's confidence for bringing otherworldly oceans to life. "I think what happens is any project, you say, 'Here's what we have to do' and you adapt the technology to service the story," Landau said in a separate interview. "We'll definitely be able to do it. I think it's about pushing storytelling and technology services the story."

Pounder, who voiced the character of Moat, matriarch of the Na'vi clan and mother of Zoe Saldana's Neytiri, said she hopes to return for the expected sequel. She's ready to put on her bathing suit for some underwater performance capture.

"Fortunately, I know how to swim," Pounder joked in a separate interview. "Thank God for the YMCA Hollywood version, warm water pool. If he's going to have the warm water, I'll be there. If the water is just regular old ocean cold water, [then a] stand-in [or] stunt person. I don't know in what fashion he'll come up with, but they got to go to tanks in New Zealand and tanks in Hawaii. That can't be all that bad."

Avatar is available today on DVD and Blu-ray.