Listening to actors David Hewlett and Robert Picardo talk about their new movie, Morlocks, you might think it's a comedy. It's not. It is, however, Syfy's newest original Saturday night sci-fi movie, which premieres tomorrow at 9 p.m.

As for the irrepressible Stargate stars, they promoted their new film by chattering on and cracking jokes like a well-oiled comedy team, discussing Morlocks, evil chickens, working in Bulgaria and what might happen if they got married to each other.

"And I would say it would be easier for H.G. Wells to recognize a television than recognize his own story here," said Picardo.

In Morlocks, a scientist (Hewlett) invents a time-traveling device only to have the famous mutants from H.G. Wells' Time Machine figure out how to travel to the present. The film was directed by Matt Codd and also stars Hamish Clark, Christina Cole, Lincoln Frager and Marem Hassler.

"I guess again I find myself playing the somewhat grumpy scientist. Strange how that happens," said Hewlett. "James Radnor is a scientist who has developed a way of jumping through time, basically, but he doesn't realize that he's actually succeeded in his mission. He thinks he's failed and killed the last team that tried it out. ... At the beginning of the film he's resorted to writing fiction books about what he's actually done, and that's where we find him and where he gets sucked backed in to this time-machine program."

"And as far as I'm concerned, I guess I'm playing the cantankerous commander once again, but that's about as far as the similarity with Woolsey on Stargate would go," said Picardo. "This guy is old military, and he's the commander of this base, but he's been being driven a little mad by the fact that his son, who's also in the service, is dying of cancer, and he becomes quite irrational and decides that the clue to saving his son's life may exist in this DNA from these super-powerful creatures in the future. So I guess you could say that he creates the time paradox of the piece by trying to steal genetic information from the future to save his son in the present."

"Well, I have all that Star Trek stuff going for me too, so I know this stuff inside out," added Picardo, who played the Doctor on Star Trek: Voyager.

In the film, "we're using a mechanism called the latch, which opens the rift. And as a result, when the last mission goes missing it's essential that we go and retrieve it. ... It's not functioning properly, so it's opening erratically now and again and causing all sorts of chaos," said Hewlett. "But the latch is the key, and the latch is what my character invented, though it didn't work. And then discover in this film that it obviously did work, and, in fact, it is being used for evil purposes by people like Robert Picardo."

"So from David's perspective it is vindicating him for having suffered a certain amount of ridicule for creating this thing that apparently didn't succeed. So he gets to vindicate his work, but also redeem the thing itself, because it's being used for an apparently evil purpose," said Picardo. "My character is using it. Yes, in a very self-centered way, but at least there's the emotional justification that he's gone off the deep end because of his son's imminent death from this very aggressive cancer."

"It's a nice little emotional attachment and a nice little sort of emotional twist on the actual science of it as well. The science is being used to cure cancer in this guy's mind," said Hewlett.

"But I'm out of my mind. I emphasize that I am crazy," said Picardo.

"And his character too," cracked Hewlett. 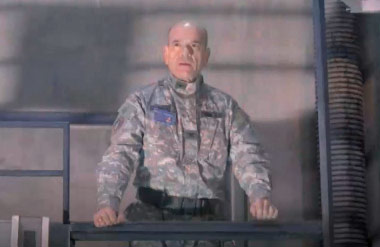 Beyond a crazy Picardo and a grumpy Hewlett, we can look forward to plenty of Morlocks and some birdlike creatures.

"I refer to them as the evil chickens, but they are these sort of giant flightless birds that are scavengers. Those are one of the evil things that we have to avoid. We see Morlocks, and we see these birdlike creature things, which I don't think are ever actually named in the show," said Hewlett.

"I think, 'Dammit, there's an opportunity there I could have come up with a good name,'" he added. "But the idea of being that the world has sort of disintegrated into such chaos that there's all sorts of these strains, like mutant-like strains of animals and stuff. These are only two of the many different sorts of horrors that are out there. ... And you know what's scary is being attacked by a giant, flightless chicken."

"My character doesn't experience the giant flightless chickens firsthand, because, being the commander, he just has to send other people off into danger. Which is one of the wonderful prerogatives of being an actor later on in your career, when they make you the boss," said Picardo. "You just tell other people, 'It's time for you to get hosed down by the blood cannon today, David, while I sit in the command room and look through the window and call out orders.' So, it's fun to assume the mantle of command and send other people off to get humiliated."

Picardo added: "I had great fun playing such a macho character. If you're looking at my other major science fiction roles, the Doctor on Star Trek, and certainly Woolsey on Stargate, I often play characters that might be good theorists and good thinkers, but you wouldn't call either of them very macho characters ... But for some reason, whenever I do a Syfy Channel movie—this applies to the one I did before this as well, where I played this ruthless businessman—they always cast me in these very macho roles. And for a guy who is ruled at home by his wife and two daughters, it's a wonderful excursion into fantasy for me."

"Yeah, David knows that I like to work from the outside out. In fact, they're not going to put me on television anymore. They're just going to view me from Google Earth," joked Picardo.

"In his first satellite performance," said Hewlett, with perfect timing.

When asked why they wanted to do Morlocks, the comedy stylings of the duo took off once again.

Picardo said he wanted to do Morlocks because he "wanted to be colder than I've ever been before, and shooting a movie on an unheated soundstage in Bulgaria in the middle of winter sounded like just the ticket for me."

"He eventually had to go outside to get warmer because the studio was actually colder than it was outside, because at least outside the [odd bit] of sun would show. Yeah, I think we're just gluttons for punishment, basically, aren't we, Robert? We can do, 'Oh, that'll be unpleasant. Sure, sign me up.'" said Hewlett.

"I have to say the only warmth that was generated was when I would laugh at David's jokes between takes. My body would sort of convulse with laughter, and that generated a tiny bit of heat," said Picardo.

"If I hadn't met my wife before Robert, I would have married Robert, because he laughs at my jokes almost as much as Jane does," added Hewlett.

"Can you imagine what our children would look like? But that ... No, that's a little weird."

"Well, this could be the hidden story behind the story of Morlocks," said Picardo.

Hewlett admits that making Syfy's original movies "always are fun. I mean, they are what they are. They don't aspire to artistic genius. They're just a bit of fun to watch and a nice little sort of roller-coaster ride. There's some fun monsters and lots of shooting and blood and stuff. You know, the stuff that I like watching."

"I remember principally, as I said, the laughter, the jokes and the fact that Bulgarians still smoke very heavily on the set," said Picardo.

"It's like their patriotic duty to smoke at all times," said Hewlett.

"Right. Secondhand smoke is their main gift to you as a visitor."

"Yeah, I think, Robert, you hit it on the head there. It's the combination of environment, because it was incredibly cold, and also just trying to work with things that aren't there. I mean, there was a lot of Morlocks running around, and trying to keep track of who were Morlocks and who were just Bulgarians, and who are we supposed to be looking at at the right time," said Hewlett. "It really is just a fun ride. I mean, there's just so much going on. I mean, Mad Matt Cob, who directed it, is a fantastic fellow who does a lot of contextual art and stuff for big, huge films."

Hewlett added: "Like if it's not a Morlock, it's like some weird-looking chicken thing. It's just kind of nonstop fun. So I think there's definitely some sci-fi stuff that you can enjoy in there, but I think just sort of settle back with a nice big thing of popcorn. I like putting a little bit of the hot sauce on it, and then just enjoy the ride."

"Well, I didn't have the opportunity to see it," said Picardo. "I only am remembering back to David's very funny and charming performance. So, unfortunately, because I was playing this particular character did not have a lot of laughs, or intentional laughs. But David's character has a lot of wry, throwaway comments, which provide a lot of the fun in the movie. I think probably the only funny moment I have is the unintentionally hilarious moment in front of the green screen, where I'm being sucked into the time rift."

"I think anybody who knows our work from other science fiction will definitely want to see us going in and out of time rifts, because it's an opportunity that may not come again," he added.

Morlocks premieres on Syfy on Saturday at 9 p.m.

Here's a preview of Morlocks:

Are you ready for some David Hewlett and Robert Picardo Morlocks action?