Move over Buffy: Fringe does a musical!

Buffy the Vampire Slayer set the bar for musical episodes, but they didn't own it, and Fox's Fringe will soon be jumping on the bandwagon, so to speak, with a musical episode of its own, called "Overture."

The episode, set to air during a Glee-themed week of musical programming in May, will have the regular cast—including, no doubt, Anna Torv and Joshua Jackson—breaking into song and dance.

No, it's not some Broadway-themed virus or a Sondheim-style alternate-universe storyline: The musical numbers, which cover popular songs, represent a hallucination by the show's resident mad scientist, Walter Bishop (John Noble).

"None of us ever thought that it was really going to happen," said musically trained co-star Jasika Nicole, who plays loyal FBI agent Astrid Farnsworth, in an interview on the show's set in Vancouver, Canada, last week. "It was just a joke. We were like, 'Oh, yeah, Fringe should be a musical.' Dancing and singing and goofing off and stuff. And then John says, 'So, you know, there's going to be a musical episode,' and I was like, 'Ha, ha, John,' and he was like, 'No, really, have you read the script?'"

Nicole adds: "When I first read that, I thought, 'How are they going to pull this off? This is really weird.' And it makes complete sense within the story. It's essentially Walter kind of manifesting his idea. He's trying to get his mind off of, you know, what's going on because he's just waiting to see what's going to go on with Peter. And essentially he's kind of created this little world in his head. And so everything is super-symbolic so all the characters embody the qualities that he notices about them the most, which is really neat. And it happens in the 1940s. Everybody's in 1940s dress, but they still have cell phones and stuff. So it's just his brain, because he's telling a story to someone. Sort of like a bedtime story to help ease his anxiety. So we get to sing in it." 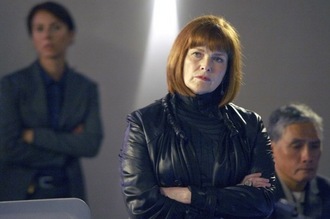 Fortunately, many in the cast have musical backgrounds, including Blair Brown, above, who plays Massive Dynamic's nefarious executive, Nina Sharp, and Lance Reddick, below with Torv, who plays the imperious FBI supervisor Broyles.

"I have a musical theater background, so I've been waiting for some moment in some realm of where I am in TV and film for this to happen and, you know, of course, when Glee came on the air I was like, 'Great, that was my chance,'" Nicole says. "And I'm in this show, which I love this show, but I'm never going to sing and dance in this show. And I did! It's so awesome!" 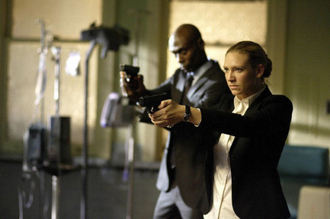 Adds Reddick: "I was a musician originally. I went to music school, college. ... I came to acting very late. ... I think Walter and Astrid more have numbers. I just, like, have a few lines that I sing."

Despite everyone's musical background, "everyone was kind of freaked out about the singing," Reddick says, adding: "For me, it was like having to play the piano at the same time; that freaked me out a little bit. But, yeah, it was fun. For me, what was more fun was actually being able to play completely to the character."

If it seems odd that Fringe would do a musical episode, well, yeah. "But random and odd is what this show is, so it's cool," Reddick said.

Fringe returns with new episodes on April 1; it airs Thursdays at 9 p.m. ET/PT on Fox.