NASA's Swift satellite has beamed back a new image of Andromeda, our neighboring galaxy, in one of the highest-resolution views of a spiral galaxy ever attained in the ultraviolet, the agency announced this week (click on the image below for the full version). 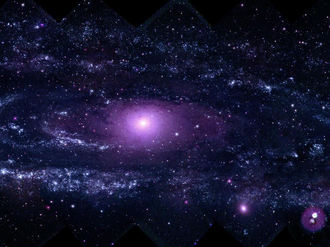 Known formally as M31 in the constellation Andromeda, the galaxy is the largest and closest spiral galaxy to our own. The image is really a mosaic of 330 individual images taken by Swift's Ultraviolet/Optical Telescope. The image shows a region 200,000 light-years wide and 100,000 light-years high (100 arcminutes by 50 arcminutes).

See if you can spot the following:

♦The insectoid aliens from District 9, which director Neill Blomkamp has said come from the galaxy, though it's not mentioned in the movie

♦The evil aliens from John Carpenter's 1988 movie They Live

♦The starship captained by Dylan Hunt as it patrols the galaxy

♦Blake's 7' Liberator as it battles invaders from the galaxy