"We actually worked with an astrophysicist up in Canada," Henstridge said in an exclusive phone interview on Wednesday. "When I was working in the observatory up there, I spent some time and asked some questions and got some answers I probably could have lived without knowing [laughs]. A little bit more eye-opening than I had imagined. It's a fascinating subject and one of those things that are very sci-fi, but at the end of the day, the possibility of this happening is kind of there. So it makes it that much more exciting to work on something that's terrifying at the same time."

With Impact and Storm, why JAG's David James Elliott is summer's master of disaster
How Phobos got its grooves

In the show, Henstridge and David James Elliott co-star as scientists called in to deal with the imminent destruction of humanity after a spectacular meteor shower results in a direct hit to the moon, leaving it on a collision course with the Earth. The four-hour limited series also stars Steven Culp and James Cromwell.

Following is an edited version of our interview with Henstridge, in which she also talks about other projects. Impact debuts on June 21 at 9 p.m. ET/PT and will conclude the following Sunday at the same time. (Possible spoilers ahead!)

So tell us a bit about the story.

Henstridge: Basically it is about, ... behind the meteor shower, this wonderful meteor shower that we get to see once in a lifetime, ... there happens to be a brown dwarf, which is sort of like a meteor. But a brown dwarf that hits the moon, sort of embeds itself in the moon. We think it's just knocked the moon slightly off balance, but we soon realize that it's changed the polarity of the moon, and it's changed the axis on which the moon rotates around Earth.

We then start to realize that it's like a magnet, and it's pulling it closer and closer to Earth. And we, as these brilliant scientists that we are [laughs], have to stop it. To stop the imminent impact of Earth and the moon. That's the gist of it. We find that out gradually as the story goes on, ... we have to find a way to stop it, or at least get it back on its normal axis.

Henstridge: I play a scientist named Maddie Rhodes, and she sort of keeps in touch with Washington on all things concerning astrophysics and that sort of thing. And not unbeknownst to me, but not quite ready for what I have to take on, they put me in charge of a team and ask me to put a team together, and I go back to my old college sweetheart, played by David James Elliott. Alex Kittner is his name in the film. I go back to him and ask him, because he's one of the best minds in the business as well. We have to band together and find a way to stop this horrible catastrophe from happening. 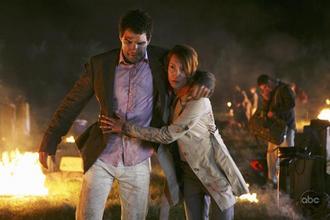 Were you familiar with the science of the story? Did you know about brown dwarfs before doing this project?

Henstridge: I knew zero about brown dwarfs before I began, and a lot more about them now [laughs]. Yeah, a brown dwarf is basically the remnants of a dead star, so it's this enormously compact matter. Heavier and more dense than anything we know on the face of the earth. You learn a lot. ...

I know you've said that physicality in acting is a lot of fun. Are you doing anything in Impact that's going to upset the insurance people?

Henstridge: No, I didn't have much to do. I was an intellect in the film, so there weren't a whole lot of stunts in this film. Hopefully soon. I do love that stuff.

I know the director of this project, Michael J. Rohl, has worked on shows like Supernatural, Smallville and Eureka. Are you a fan of shows like that? Sci-fi in general?

Have you seen the finished product?

Henstridge: I just saw it. My kids watched it with me as well, which was amazing. Such a cool thing for me. With a lot of the kinds of films I've done, they haven't been able to watch [laughs]. But it was a real treat for us to be able to sit down and watch. We watched the first night, and they were begging me to watch the second night. They were really riveted by it. They loved it. That was really exciting for me. It was really nice. They kept giggling whenever I was onscreen. It was really cute. And it's educational as well.

So we're all very, very, very sad about Eli Stone getting canceled [Henstridge was a cast member on the fantasy series].

Henstridge: Thank you for the third very. We really enjoyed making that. We thought it was a great message and a really entertaining show. ... It was a bummer.

Would you do another series?

Henstridge: I'd love to, actually. I love the stability of doing a show. I really enjoy the family aspect of it, the stability of it. ... It's lovely. Practicing your craft every day in different ways. You never know what's coming up next week, what kind of struggles, what will be going on. I love it.

Everyone seems to be remaking sci-fi/fantasy shows and films. What do you think: Should they remake Species?

Henstridge: Oh! Has it been that long already?

No, but that doesn't seem to stop anyone.

Henstridge: [Laughs.] That's true. It doesn't. Oh, my God, they've made so many Species films! They might be making one right now. I'm actually going today to do a voice-over for a Stan Lee cartoon, which will be coming out on telephones. They're little, not webisodes. I'm calling them "phoneisodes." I'm not quite sure of the format yet. I'm playing this great character called Charity Vile, with Stan Lee, who is doing one of the voices as well. And it's his work. ... It's really been very entertaining. That will be fun. And I have a couple of movie offers on the table, but I haven't confirmed anything yet.

Can you tell us anything else about the project? Characters we might recognize?

Henstridge: I'd better not. I'm not really sure yet if I'm allowed to, so I'd better just keep mum about it. ... It's called Time Jumper. It's really cool.