Imagine not only taking on a classic children's tale and spinning it into magical prequel, but also working with a filmmaker who felt like Peter Pan himself. That was the case for the stars of Syfy's Neverland, Charlie Rowe, Rhys Ifans and Anna Friel, who were thrilled to be a part of writer-director Nick Willing's Peter Pan prequel.

"Looking at Nick and being around Nick all the time, I realized that he was actually this character Peter that he'd written about," said 15-year-old Rowe, who plays Peter. "Nick Willing is Peter Pan, really. So I just tried to involve him into my part because ... yeah, I think he's still a child. If you meet him, he's a complete child, and it's his little baby, this film. And so I just tried to involve him as much as I can into the part I was doing. And, yes, my part is basically just Nick, very honestly."

"Everyone knows the story of Peter Pan. And what was appealing, I guess, for all three of us is that this goes a long way, if not all the way, to explain how Peter Pan becomes Peter Pan, how he acquires these magical powers, and how Captain Hook loses his hand," said Ifans, who took on the iconic role of Hook.

"Has any story ever before explained why Hook despises Peter so much? I don't think it has," said Friel, who plays a new character, a lady pirate named Elizabeth Bonny. "That's what fascinated me with the script; that you get the story before."

Neverland is Willing's take on J.M. Barrie's classic tale, one that begins with a young gang of pickpockets who steal a magical orb that transports them to a fantastic land before Peter met Wendy and before Hook became a Captain. The miniseries premieres on Sunday, Dec. 4 and Monday, Dec. 5 at 9 p.m. ET and stars Ifans, Rowe, Friel, Bob Hoskins and Keira Knightley as the voice of Tinker Bell.

"When we read the novel, Hook and Peter are already embedded in Neverland. So I think what gives us another connection to Neverland is that we see them, albeit in another time, but we see them as human beings who live in a world where you eventually die," said Ifans. "So we see what the wonder of somewhere like Neverland, what it does to the psyche. And in Peter's case, it makes him good, and in my case, it makes me very, very bad."

"And in my case, it makes me evil," added Friel. "I love the dark undertones of the story ... With a story like Neverland, it has never been done before. Why can Peter Pan fly? Why is there eternal life? Why do you never grow old?" 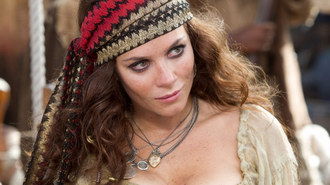 When it comes to his classic character, Captain Hook, Ifans admits he had "quite big boots to fill. It was great fun, a completely different story to the original story. I think we did it justice."

According to Ifans, "we all know the Hook that we were presented with in the novel, and that Hook is essentially bad to the bone. And I wanted to kind of explore a journey. How would a man become that bad? What would it take for a man to shed pretty much all of his moral fiber, and what happens to the mind when it's offered eternal life? Does it corrupt, or does it illuminate? In Hook's case, it corrupts, but it also liberates him from a very, kind of, stifled, unrepressed Edwardian England. Bonny liberates him completely and sexually, which wouldn't have been the case in England. ... What's the price of liberty? So that was all very interesting to play."

As for Friel's character, Elizabeth Bonny is the Captain of the Jolly Roger when the Neverland story opens.

"It's always hard playing a character that people necessarily won't like," said Friel. "And I think that the fact that Nick wrote a very complex Hook and gave him a back story and [where] where his dark side came from, and to be influenced by a woman, I thought was quite an interesting thing to look at. ... She was a woman who'd been stuck on a ship with the same 20 or 25 men. ... And when Captain Hook arrives he's like a god that's come from the sky and she wants all his knowledge.

As for Peter, Rowe was fully aware of the importance of his character in pop culture at large. "I was hugely nervous of the fact that every single boy and girl around the world had grown up with this magical story and every boy has played with their wooden swords in the playground with their best friend being Peter Pan and Captain Hook," said Rowe. "I hope people like the character that I've tried to create, because ... this he isn't Peter Pan, this boy. He's a completely new character that we've never seen before, and yeah. I hope I did him justice." 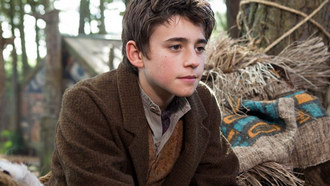 But taking on their roles wasn't the actors' only challenge. The miniseries was also physically challenging and has over 2,000 special effects, and so often they were working against nothing but green screen.

For Friel, thought, it was all about tight corsets. She had to "get into really tight, tight leather trousers everyday and those corsets. I'd say physically that was the hardest thing and learning to use a sword and wrapped up in that tight corset. ... At least I didn't have to fly. I know that must have been the hardest thing for Charlie."

The actors said that their director was crucial in helping them "imagine" their magical world even when it wasn't there.

"The fact that we started off in a real environment, on a real ship, we were able to suspend our disbelief much more easily when we [had] to work on so much green screen. And Nick really cleverly gave us fantastic visuals of what we would be seeing and what we'd be looking at. So it was kind of like being a child in the most fantastic dress up box you could ever imagine or wish to have and it was all about play," said Friel.

"It was just the whole transporting feeling of making the film. We shot it in Ireland so we felt kind of far away from everything. We felt pleasantly isolated and left alone so we were able to indulge and invent this ... visual banquet that Nick's created. And really indulge that and play in it," said Ifans. "And so I found it liberating actually and thrilling to work on the green screen and then finally when we got to see it, it was just a thrill beyond words."

Here's a sneak peek of Neverland: