"More than anything, I've tried to make the movie true to the intention of Romero's original," Eisner told SCI FI Wire. "Romero's [Crazies] is in the shadow of Vietnam. Our movie exists in the shadow of 9/11, the Bush presidency, invading Iraq ..."

What we saw on set when The Crazies invaded Georgia
News briefs: Friday 13th II release; Let Me In casting

In the small fictional town of Ogden Marsh, Iowa, the outbreak of a deadly disease called the Trixie virus causes the infected to go literally mad, stalking and slaying their beloved and anyone else who gets in their way. Timothy Olyphant headlines a cast as Sheriff David Dutten, and the cast includes Radha Mitchell, Danielle Panabaker and Joe Anderson. 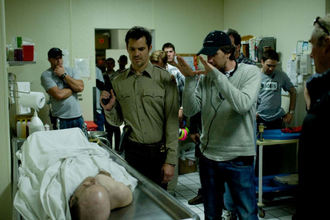 "I remembered having been a teenager and a friend of mine had the VHS tape and we watched this bizarre movie," says Eisner. "It really stuck in my brain, the concept—the people closest to you, your friends, your neighbors, your family—going from your most trusted companions to these rage-infected violent terrors. It was a real primal fear and one that has resonated for me since that movie. I thought that concept was so strong that I was really interested in re-examining it."

Although the new Crazies is still relatively low-budget by Hollywood standards, it was a far cry from Romero's original $200,000 budget. "It allowed us to do things that he couldn't do in order to reflect the true scale of the military during a containment," says Eisner. "It was something that helped the realism and the intensity of the movie."

To create the Trixie virus, Eisner says he felt a bit like a mad scientist. "We imagined ourselves as evil '80s or '70s military scientists biologically engineering the disease," Eisner says with a laugh. "We did research on the worst physical, mental and emotional symptoms of diseases. We discovered things like the scarring that you get from a really disfiguring disease called Steven Johnson Syndrome. Tetanus looks like a disease that inspires rage, these incredible involuntary tightening of the muscles. [We added] eye ailments and specific nose and membrane mucanal things. We put them all together, created our hypothetical disease and then added an accelerant."

Eisner and company even received guidance from the government's Centers for Disease Control and Prevention to keep things as realistic as possible. "We talked to the CDC about the disease itself and also about the containment protocol and how they would deal with it."

Unlike the original, this take on Crazies avoids the military point of view of Romero's original to make the movie "scarier and more disorienting," according to Eisner. "If the heroes don't know what's happening, and they are playing catch-up and trying to figure out why they are being rounded up and contained, it makes for a more terrifying experience for the audience and for the characters."

The Crazies opens in theaters nationwide on Friday.

(We attended an advance screening of the movie on Wednesday night in Hollywood, which was staged as a scene from the film, including gas-masked soldiers hustling viewers into "Containment Zone B," i.e., a movie theater in "Ogden Marsh." Check out our image gallery below; click to enlarge.)