Fans got a good look at the new lycanthrope from the upcoming reboot of Universal's The Wolfman at the 2009 American International Toy Fair in New York this week.

In the remake of the classic movie monster property, Benicio Del Toro plays the hairy beast (literally and figuratively). The movie has been off the radar since the studio decided to shift the release date from April to November 2009.

Universal and Tongal paying homage to classic monsters with 'Out of the Shadows' art initiative
Original vs. Remake: The Wolf Man vs. The Wolfman

But the full-moon junkie was actually in all his glory at Mezco's booth, where the company showed off its intricately sculpted Wolfman movie tie-in figure in both 7-inch and 12-inch versions.

Mike Drake, Mezco's director of special projects, confirmed to SCI FI Wire that the Wolfman figures were sculpted from the likeness of Del Toro (underneath the wolfie changes, of course). Both size versions of the figures will give collectors the choice of either the normal, fierce Wolfman posture or the crouching, bloody post-attack Wolfman.

Mezco also showed off a preliminary design for a prop replica gold medallion, which is featured in the film as a key component of the curse plaguing the Talbot family. 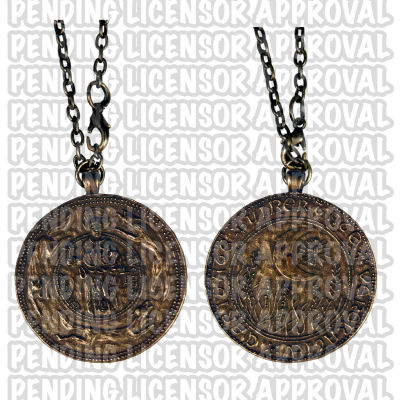 Del Toro plays Lawrence Talbot, the prodigal son of Sir John Talbot (played by Oscar winner Anthony Hopkins), who returns home after the mysterious disappearance of his younger brother. The Wolfman hits theaters on Nov. 6; the Mezco figures will be available for purchase this fall.