Saturday morning, The Avengers took over Disney's D23 Expo and Blastr was there to see it! Robert Downey Jr., Chris Hemsworth, Jeremy Renner, Scarlett Johansson, Tom Hiddleston and Cobie Smulders all hit the stage to present a new and exclusive preview of the film. If you weren't able to attend, don't worry, because we've got you covered!

Here's a way to watch The Mandalorian (and other Disney+ content) without paying a Hutt-sized cost
WIRE Buzz: D23 postponed until 2022; Jurassic World VelociCoaster finds a way; more

Before showing the new trailer, there was an introduction video that began with the post-credits sequence from Iron Man. The words "From Technology" flashed across the screen followed by scenes from both Iron Man 1 and 2.

Next, the words "To Mythology" were shown accompanied by clips from Thor. From there, we saw "From Science" with footage from The Incredible Hulk that showed General Ross (William Hurt) talking about the threat of gamma rays. During this, they conveniently left out any scenes of CGI Hulk or Edward Norton (they're obviously trying to avoid continuity issues).

Last, but not least, the words "To Legend" appeared, which were followed by scenes from Captain America: The First Avenger. The entire intro was as a great build up piece. Marvel was pulling out all the stops for their big finale.

Kevin Feige introduced an extended trailer, which starts off with a scene between Nick Fury (Samuel L. Jackson) and Loki (Tom Hiddleston). Loki's being held in an isolated chamber and he slowly looks around to check out its construction.

Fury locks him in and says, "In case it's not clear, you try to escape, you so much as scratch the glass -- 30,000 feet straight down to a steel trap." Fury pushes a button on a keypad that opens a hole in the floor that reveals clouds and air. They seem to be hovering in the Helicarrier.

Loki replies, "It's an impressive cage, but not built for me." Fury says, "You're right; it's built for something a lot stronger (a heavy handed nod to it being the chamber they'll use to contain the Hulk)."

Judging from their conversation, it sounded like Loki was taunting Fury over the fact that he lost the Cosmic Cube. If you saw the post-credits scene in Thor [spoilers], you know Loki is aware of its power and what it's capable of.

The whole time Fury and Loki are talking, the entire Avengers team is listening in a conference room. They show Black Widow (Scarlett Johansson), Thor (Chris Hemsworth), Bruce Banner (Mark Ruffalo) and Captain America (Chris Evans) all sitting at a table. Maria Hill (Cobie Smulders) is out in another office watching on two flat screen monitors. After Loki's done speaking, Bruce, who's wearing a purple shirt and glasses nervously says, "He really grows on you doesn't he?" 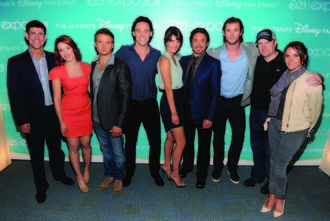 There's an action montage that features various members of the team fighting -- each other! There's a low angle shot of Iron Man and Thor grabbing fists as if they're trying to overpower each other. Then there's a shot of Captain America crouched down with his shield covering his body, while Thor is coming down on him with his hammer.

Next, Nick Fury is sitting at a table telling everyone about how an I.D. was sent out to bring together a team of remarkable people who could defend the world when they couldn't defend themselves.

The final scene features Tony Stark standing behind a bar (at what appears to be his house) talking to someone. He says, "Let's do roll call; we have two highly trained assassins (shows Black Widow and Hawkeye standing next to each other shooting bullets and arrows), a demigod (shows Thor) and a living legend (shows Captain America)." It cuts to Loki standing and looking at him as he replies, "I have an army." Tony says, "We have the Hulk." At that moment, a close-up of the Hulk's face flashes across the screen as he yells at the top of his lungs!

The Avengers logo comes up and it fades to black. Feige went on to reveal that The Avengers has two more weeks of filming to go. And even though the cast was there, they didn't say much. They each got a hefty applause when they stepped on the stage, but Robert Downey Jr. was the only one to receive a standing ovation.

What do you think? Does this sound like the Avengers movie you want to see?