How does one follow up writing for Zeus, Athena and Medusa? Screenwriters Phil Hay and Matt Manfredi are giving undead police and violent superheroes a shot.

The writing team of Hay and Manfredi have a pretty exciting year ahead of them. Their rewrite of The Clash of the Titans hits screens April 2, and they are already knee-deep in three new projects. Along with writing the comedy Staycation for Hangover director Todd Phillips, Hay and Manfredi are adapting two comic properties, Peter Lenkov's R.I.P.D. and Garth Ennis' The Boys.

The Boys' horrifying sex scenes are part of a gory history of deadly super-powered sex
Important Toy News: Heroes, horror, and Battlestar Galactica are the hottest in collectibles this week

"R.I.P.D. was brought to us by David Dobkin and Neal Moritz, director and producer, respectively," Phil Hay told SCI FI Wire. "The graphic novel by Peter Lenkov was something we hadn't seen before."

R.I.P.D., which stands for "Rest in Peace Department," is a 2003 Dark Horse graphic novel about two deceased cops who get a chance to return from the dead and hunt down their assailants in exchange for 100 years of service to the R.I.P.D. "We genuinely loved it and kind of set about this journey of trying to turn it into a movie," says Hay. "In its nature, it's basically a buddy-cop comedy in a very spectacular Ghostbusters-like world. It's been really fun."

The writers say the feel of the material will be familiar to fans of Lenkov's work, but R.I.P.D. will not be a direct adaptation. "There's something essential about its nature that's similar," says Hay. "But I think it kind of veers off into a pretty different territory."

"If you know the comic, the nature of the two main characters is very similar," adds Manfredi. "In terms of the plot, it's quite different, but the feel, we hope, is similar.

Hay and Manfredi have already turned in their draft and now await the decision of the powers that be. "The script has all along gotten really good reactions," says Hay. "It's just about the complex machinery that it takes to get one of these studio movies going. We would always make ourselves available to work on that movie, because it really is close to our hearts." 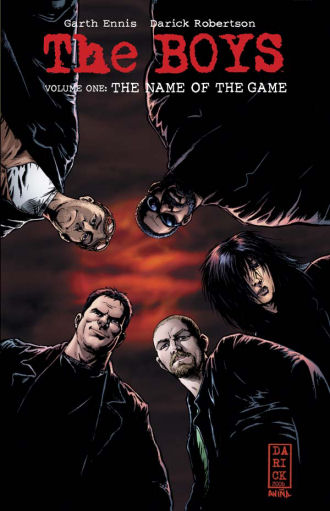 The screenwriters have also recently turned in an adaptation of Garth Ennis' The Boys for Kickstart Productions and Columbia Pictures. Ennis, who also created the popular Preacher, began the ongoing series in 2006, about a group of super-powered CIA agents who basically keep watch over the superheroes of a contemporary society. When a superhero steps out of line, "The Boys" take the necessary steps to police them in no-holds-barred fashion. Rife with sex and violence, the series was canceled after six issues by DC's Wildstorm because, as Ennis has stated, they found the anti-superhero tone to be a little bit unsettling. The series later found a home at Dynamite Entertainment.

Hay and Manfredi say Ennis has been great to work with, inviting them to make changes as they feel necessary. "We're just huge fans of the book and of Garth Ennis," says Manfredi. "It's very faithful to the original. It has been a really good experience to work on."

Hay and Manfredi have turned in a first draft of The Boys. Columbia is currently searching for a director.

For the latest sci-fi news, follow us on Twitter at @scifiwire
Tag: RIPD
Tag: The Boys
Close Search Return to SYFY homepage.