Doctor Who season six won't air until next spring in the U.K. (and it's not yet known when it'll air in the U.S.), but some pictures of what MAY be the Doctor's upcoming new monsters have popped up online, and we have a first look here. (But before you click, be aware these might be considered SPOILERS by some.)

Right now, the Doctor Who cast and crew are hard at work filming the fourth episode, titled "What Are Little Boys Made Of?," which was written by Sherlock co-creator and frequent Doctor Who writer Mark Gatiss ("The Unquiet Dead," among others, and most recently "Victory of the Daleks"). We already showed you some pictures from the filming that took place in Bristol a few days ago.

This episode reportedly takes place in a giant dollhouse—and the pictures that have been leaked do make perfect sense in that context. The new monsters are definitely doll-like in appearance and also bear an eerie resemblance to the Clockwork Droids from the series-two episode "The Girl in the Fireplace."

Are these photos legit? The fact that one of the people working on the production team has tweeted about how unhappy she was that those pictures were leaked adds some weight to them being genuine. (Unless we're being VERY misled.) 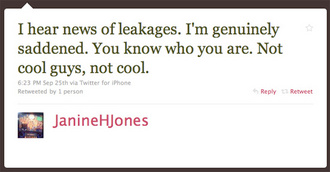 However, we think these new monsters look pretty cool and quite creepy all at once, and the sight of them is making us even more excited about the upcoming season of Doctor Who. How about you?