[Updated: The official Star Trek Web site has posted more examples of these artistic interpretations of the Enterprise, with more to come.]

March 6: Paramount has released photos of three replicas of the U.S.S. Enterprise, which are currently on display at the Arclight Theater in Hollywood, from J.J. Abrams' upcoming Star Trek film.

The three Enterprise models are the first of many upcoming interpretations by respected artists from all over the world.

These 34-inch-long replicas were cast from the actual 3-D digital models created for the film by Industrial Light & Magic. 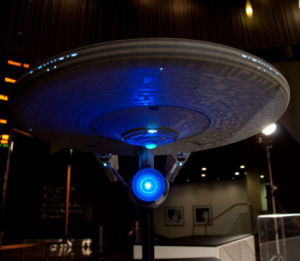 The FX Company/Quantum Mechanix model (above) features lights, decals and "aztec" painting patterns designed to mirror the actual ship seen in the film. The FX Company is a professional model-effects shop working with modelers Quantum Mechanix on the production and design of this ship.

The second is a model by Mr. Brainwash, or MBW, the pseudonym of a well-known eccentric Los Angeles-based pop street artist.

The third is by Duncan Lemon, a respected Santa Monica, Calif., street artist who is inspired by chameleons and subway graffiti.