New FlashForward mystery: Was that a spaceship?

Now that everyone has had time to catch up on the latest episode of ABC's FlashForward and debate what they saw, we figure it's time to take a closer look at the ending in Somalia where ... something .... appeared in the sky.

The scene takes place in an area where a whole bunch of people suffered a blackout similar to the flash-forward, but this one happened back in 1991. A small shepherd boy watches a bunch of flying crows suddenly die and plummet to the ground, crests a hill, and sees bodies all over the ground, followed by something with the appearance of a cloud that looks sort of maybe like a ship.

To figure out what it might be, we eavesdropped on the fan debate over on ABC's site and have pulled together the list of possibilities so far:

Some kind of ship: The cloud is a ship, human or otherwise. Or it's the trail from a ship. This alleged ship emitted something or dropped some kind of bomb or otherwise did something that killed that crows. It may even be a Nazi ship, since the whole episode dealt with that cagey old Nazi in prison. Although these are all interesting theories, consensus from the audience is that the cloud isn't a ship, mostly because that would seem too obvious.

A nuclear explosion: The cloud came from a nuclear, or nuclear-like, explosion. True, some kind of explosive something-or-other (or emissions from an explosion ... see EMP below) may well have caused the crows to die in Somalia, but we also know crows later die around the world, and no explosions are reported. This one seems unlikely too.

An EMP pulse or solar flare: These theories come up regularly but are shot down pretty quickly, since they were ruled out by the characters themselves in the pilot. We guess it's still possible, and the first episode was throwing out a bit of misdirection, but it's not very dramatic or satisfying.

Discharge from the tower: The cloud-ship-thing is seen hovering over a strange tower, but could it have actually come from the tower? The theory here is that there may be some sort of plant or hidden complex underground housing ... er, something ... that caused the crows to die and the people to pass out. Or that the tower itself is emitting waves of something. Consensus seems to be the tower was just in the shot to give perspective, though.

It's a Higgs boson: In case you didn't know (we had to look it up), a Higgs boson is "a massive scalar elementary particle predicted to exist by the Standard Model in particle physics." Assuming the particle could be the size and shape of a cloud (doubtful!), this would certainly tie in to Rob Sawyer's book Flashforward, on which the show is based. No one lends this theory much credence, though, because the show seems to be taking pains not to repeat what happened in the book.

The inevitable Lost comparison: It's been noted by many that this "cloud" could be smoke, which is eerily similar to Lost's "smoke monster." Deliberate? Probably. Meaningful? Doubtful. There was no clankity-clank sound, after all.

Cloaked Goa'uld Death Glider: The cloud does bear a passing resemblance to the Goa'uld fighters from Stargate SG-1, but unless Richard Dean Anderson shows up as a guest star, we're going to have to say no. 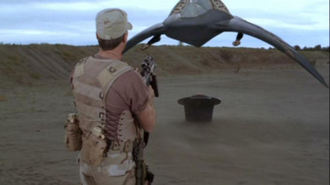 Our best guess: None of the above. The cloud will almost surely turn out to be some kind of red herring, like most of the "clues" we've gotten so far. Or it's a nuclear crow ship that activates the tower, which in turn creates a Higgs boson solar flare on the island from Lost, where MacGyver is living in retirement.