Some new concept art from Iron Man 3 has leaked out, giving us a new look at what seems to be the Iron Patriot armor. Want to see?

We first got a look at the real-life version of the new armor via some leaked set pics a while back, but damage control indicated it was actually just a tweaked version of War Machine.

Exclusive: Rise of the Teenage Mutant Ninja Turtles creators reveal concept art and new vision
A secret Goonies sequel script has been in the works for nearly a decade, and here's the concept art

But it's hard to argue that this isn't Iron Patriot—especially since Marvel recently filed some trademarks to use the phrase. And c'mon, it definitely looks like Iron Patriot.

Now, the big question is how exactly director Shane Black will be using the armor, since the comic version of the character is played by Spider-Man baddie Norman Osborn. The use of Osborn is connected to the Spider-Man film franchise, which is tied up at a different studio, so they'll apparently be tweaking the origin tale to fit what they have available.

Iron Man 3 is focusing on the popular Extremis comic storyline, which follows a nano-tech threat, and this new bit of art also offers a look at the new Iron Man suit.

Check it out below (click for larger) and let us know what you think: 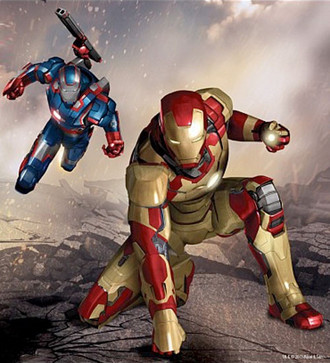