Most of what we've seen from Sam Raimi's upcoming Oz the Great and Powerful has been framed around the lens of the film's leading man, James Franco. But the latest poster is all about the crazy world around him—including a terrifying first look at the new, evil flying monkeys.

The latest look at Raimi's insane, big-budget fantasy flick focuses on the Emerald City and beyond, showing off crazy creatures, luscious backdrops and the extremely creepy new take on the flying monkeys. Considering Raimi's horror movie cred, you just knew those things would be freaky.

Aside from Tim Burton (Beetlejuice, Alice in Wonderland), Raimi (Spider-Man, Evil Dead) is about the only big-name director we'd get excited about to tackle a prequel to the 1939 classic Wizard of Oz.

The film stars Franco as Oz, Rachel Weisz as Evanora, Michelle Williams as Glinda and Mila Kunis as Theodora.

Check out the poster below and let us know what you think (click for larger): 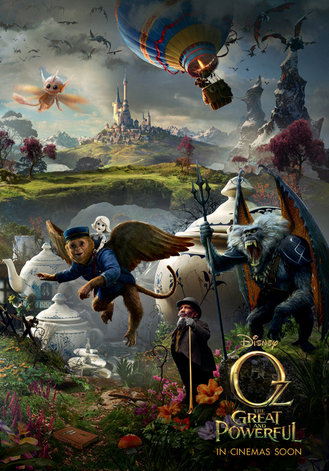 Oz opens March 8, 2013, in the U.S. What do you think? Are you interested in seeing what happened before Dorothy crash-landed in the magical land?