We've got the new poster for Daybreakers, the upcoming sci-fi vampire movie that stars Ethan Hawke.

Hawke plays Edward Dalton, a researcher in the year 2019, in which an unknown plague has transformed the world's population into vampires. As the human population nears extinction, vampires must capture and farm every remaining human or find a blood substitute before time runs out. A covert group of vampires makes a remarkable discovery, one that has the power to save the human race.

The poster's very cool, but who else thinks of The Matrix meets Blade III? Wasn't one of the ideas in the third Blade movie that the vamps were going to create these massive bloodfarms of humans in plastic bags? Still, nice nod to Blade Runner by setting the movie in 2019. 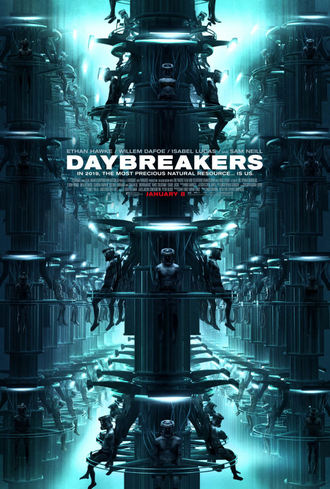