For 10 years now, we've been impatiently waiting to see Clark Kent become Superman on Smallville—and so has Tom Welling. It's been a long time with the "no flight, no tights" rule of the successful series, but soon it will all change. Meanwhile, The CW has decided to tease us with a new poster that shows Welling as Superman. Kind of.

From the poster released by The CW (look at the reflection below, and click on the image to view it at a larger size), it's a safe bet to say that we'll get to see Welling sporting the blue tights and the red cape before the series' end this spring. (Not that we ever doubted that.) And yes, we've seen the suit before in the series, but not with Welling in it. Which is what we really want to see, no?

We're hoping that the iconic moment will happen sooner than in the very last episode of Smallville, but our guess is that the powers that be will probably save the iconic shot of Clark as Superman flying away to the horizon (or space, or something like that) for last. 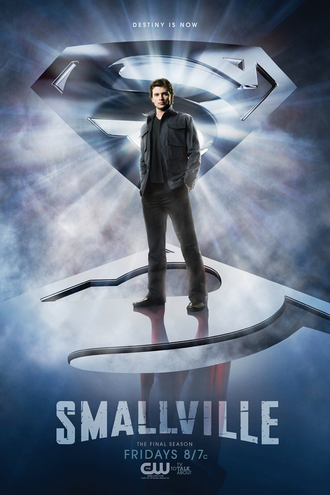 And after 10 very long years, it'll undoubtedly be sweet.

Now, if only Michael Rosenbaum can stop saying no to coming back to Smallville and finally be persuaded to make one final appearance as Lex Luthor, it will be even sweeter.

So what do you think?

(via TheSource and Moviehole)