New York Toy Fair: The 10 cool Star Trek collectibles you must have!

Forty-three years after Gene Roddenberry launched Star Trek, the franchise is still boldly going where no show has gone before. Regardless of J.J. Abrams' big-screen reboot movie, which hits theaters on May 8, there's just no sign of dedicated fans' getting sick of the mythology—or, more important, of the collectible doodads and knickknacks it inspires.

In the exhibition space at the 2009 American International Toy Fair in New York this week, there was no shortage of Trek-inspired merchandise created to satisfy even the most obscure Trekker desire, based on every series incarnation and film sequel.

Some of it was lame (yeah, we're looking at you, Trek-inspired Barbies), but some items were absolutely inspired. SCI FI Wire compiled this list of must-have Star Trek toys coming out this year; you might want to start saving up your bars of gold press latinum now ...

Original (or TOS) Tricorders. Diamond Select Toys have quickly become the source for high-quality, affordable Trek prop replicas, and they've really outdone themselves with this trio of classic tricorders. The science tricorder features audio dialogue of Mr. Spock from the series, a light-up scanner with original sound effects and a call-back feature. The medical tricorder looks like that boxy, over-the-hip monster from the show, with McCoy's voice, a medical scanner with original sound effects and clicking sounds when a button is depressed. Last but not least is the geological tricorder, which was only featured in one episode of the series, and this one-of-a-kind prop features the voice of the late Majel Barrett (the Enterprise computer voice and Mrs. Roddenberry). Each will retail for $50, and all are set for staggered release in '09, starting with the science version. 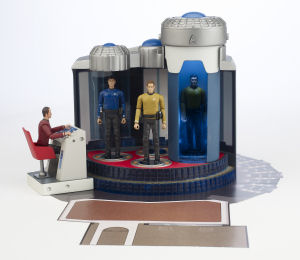 Star Trek Transporter Playset. Playmates proves it isn't messing around when it comes to producing some creative playsets with its line of Star Trek movie tie-in toys. The Transporter Room Playset features authentic movie sound effects and a see-through Transport Cylinder, which holds any of the 3.75-inch Star Trek movie action figures. But that's not the best part! Any figure can be placed into the cylinder and "transported" to other locations. Oh, yeah. Plus it comes with a Scotty figure so you can scream about dilithium crystals to your heart's content. Available from Playmates at the end of April.

The Next Generation Enterprise-D Ship with Separation Action. Yes, every toy company and its mother has made an Enterprise ship, but what makes this Enterprise-D special is that the saucer separates from the body of the ship: you know, in case of emergency. It's actually one of Diamond Select's most requested ships and features sweet add-ons like Picard's voice, lights and authentic sound effects when you separate or reconnect the saucer section. Available from Diamond Select Toys in April. (Image is at the top of this story.) 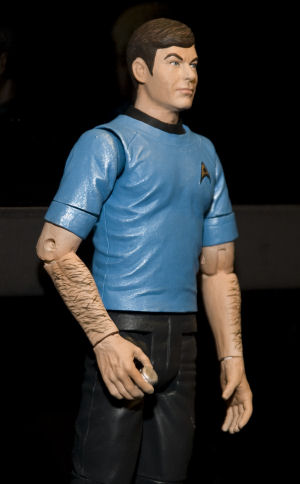 TOS McCoy Action Figure. It seems like any iteration of classic Trek character action figures has been done twice, but then one manages to appear that makes you say, "Now I've seen everything." Diamond Select's latest series of TOS action figures includes a McCoy with ... hairy forearms. Yes, DeForest Kelley's shaggy arms have been forever immortalized in 7-inch plastic. You can almost hear McCoy saying, "Dammit, Jim, I'm a doctor, not Robin Williams!" Available from Diamond Select Toys in August. 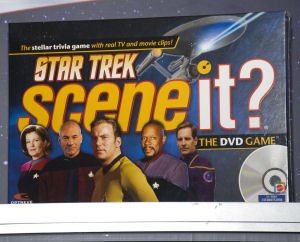 Star Trek Scene It. Are you that Trek fan who's forever quoting dialogue from every show and movie? Do you know your ensigns from your science officers just by the colors of their shirts? Have you incited arguments over the correct pronunciation of a Klingon phrase? OK, then it's time to prove your prowess with Mattel's Scene It? Star Trek interactive DVD/board game. It features questions from every Trek series and film (not including Abrams' Star Trek), including audio, clips and more. Available for $39.99 from Mattel in May March. 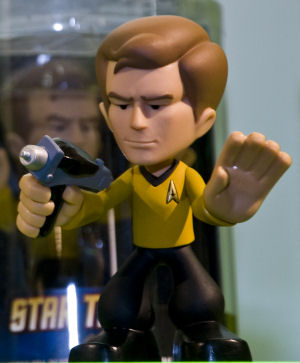 TOS Quogs. Funko actually puts the fun in Trek with its urban-vinyl style, poseable action figures of Captain Kirk, Spock and that hottie Orion slave girl from "The Menagerie." The artist's interpretations are clever and original, making something old look very new again. Available from Funko this spring. 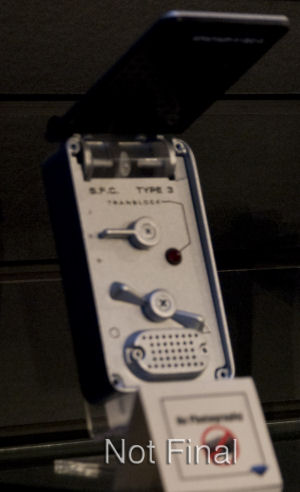 Wrath of Khan Communicator. OK, we've seen Trek communicator props before, but this Wrath of Khan version is so much better than the others. Why, you ask? Because when you flip this baby open, Shatner's voice screams "KHAAAAAAAAN!" in all its manly, outraged glory! Just imagine the disruptive possibilities ... Available from Diamond Select Toys in November. 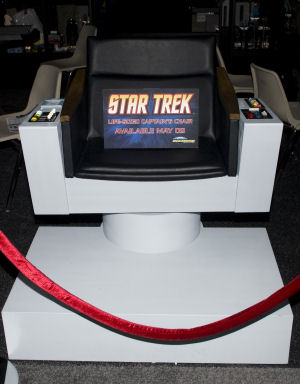 TOS Life-Sized Captain's Chair. Is your old leather chair looking worse for wear? If you've got $2,717.01 to burn, why not pick up a surefire relationship-destroying, life-sized Trek captain's chair, just like the one Kirk's rump sat in? The full-sized chair swivels, lights up, weighs 140 pounds and features both voice and sound-effects playback. Diamond Select is only creating 1,701 (get it?) of these bad boys, so start moving the furniture now! Available from Diamond Select Toys in April. 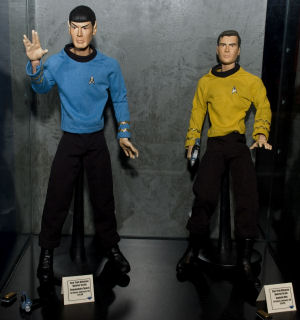 TOS 12-inch Kirk and Spock Figures. We love details, and it's the little things, like a lifted eyebrow, that can make all the difference. That's why we're a little in love with the Star Trek Ultimate Quarter Scale figures of Kirk and Spock from Diamond Select. From Spock's slightly lifted brow to his razor-sharp bangs and Vulcan salute, these premium sculpt dolls had us at "Dif-tor heh smusma." Available for $79.99 from Diamond Select Toys this month.

RC Flying Enterprise and Bird of Prey. Sure, Enterprise ship models are fun to look at, but they don't exactly live up to their potential collecting dust on a stand. Aside from throwing one up in the air, that's the closest they're gonna get to boldly going anywhere. But, finally, Tyco RC has fixed that by creating the first-ever flying Enterprise. The durable foam-constructed ship comes in two versions: a glider that will fly for about 30 seconds and a full-out remote-controlled ship that can fly up to 50 feet and zip around for about 15 minutes. Both charge right from the remote, and if you want to get really fancy, pick up the Bird of Prey for some aerial dogfights. Available from Tyco in April. (Image below)