In anticipation of the release of 20th Century Fox's X-Men Origins: Wolverine, Hasbro debuted its line of official tie-in action figures and role-play accessories inspired by the film at the 2009 American International Toy Fair in New York this week.

The Gavin Hood-directed prequel focuses on the origin story of the feisty and feral X-Men character Wolverine (Hugh Jackman), including how the character came to have adamantium grafted to his bones and why he has such hatred for his archnemesis and fellow mutant Sabretooth (Liev Schreiber). Jackman, who also acts as producer this time around, reprises the character for a fourth time in hopes of reviving momentum for the waning X-Men franchise.

At the Hasbro presentation center, the X-Men Origins: Wolverine area revealed portions of a new 3.75-inch line of Wolverine action figures, some based on the likeness of the actors/mutants in the film and others reflecting the costuming of the classic comic-book characters. 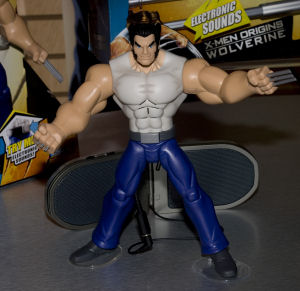 On display specifically from the film was a plainclothes version of Jackman's Logan with extended claws and swappable clawless hands, the classic jeans-and-white-tank-costumed Logan, a Weapons X commando and the trench-coat-wearing Sabretooth, a la Schreiber. Classic comic versions of Deadpool and Maverick were also on the shelf. 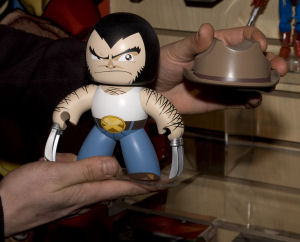 In conjunction with the figures, Hasbro also showed off its latest set of Mighty Muggs, including a Jackman-inspired Logan including extended claws, detachable hat and cranky-looking scowl. There's also the 10-inch Triple Blade Wolverine figure that comes with a speaker that emits angry swipe sounds and growls. Hasbro expects this figure to be in stores this fall. 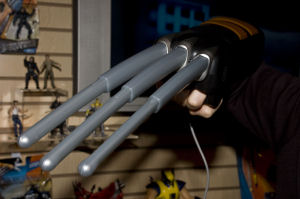 Arguably the coolest piece of the line is the Wolverine Electronic Claw. Retailing at $19.99, this Wolverine-inspired glove straps onto your hand and, with a quick movement, snaps out three plastic claws with battle-action "snikt" sounds and some Jackman Wolverine quotes. X-Men Origins: Wolverine opens May 1.