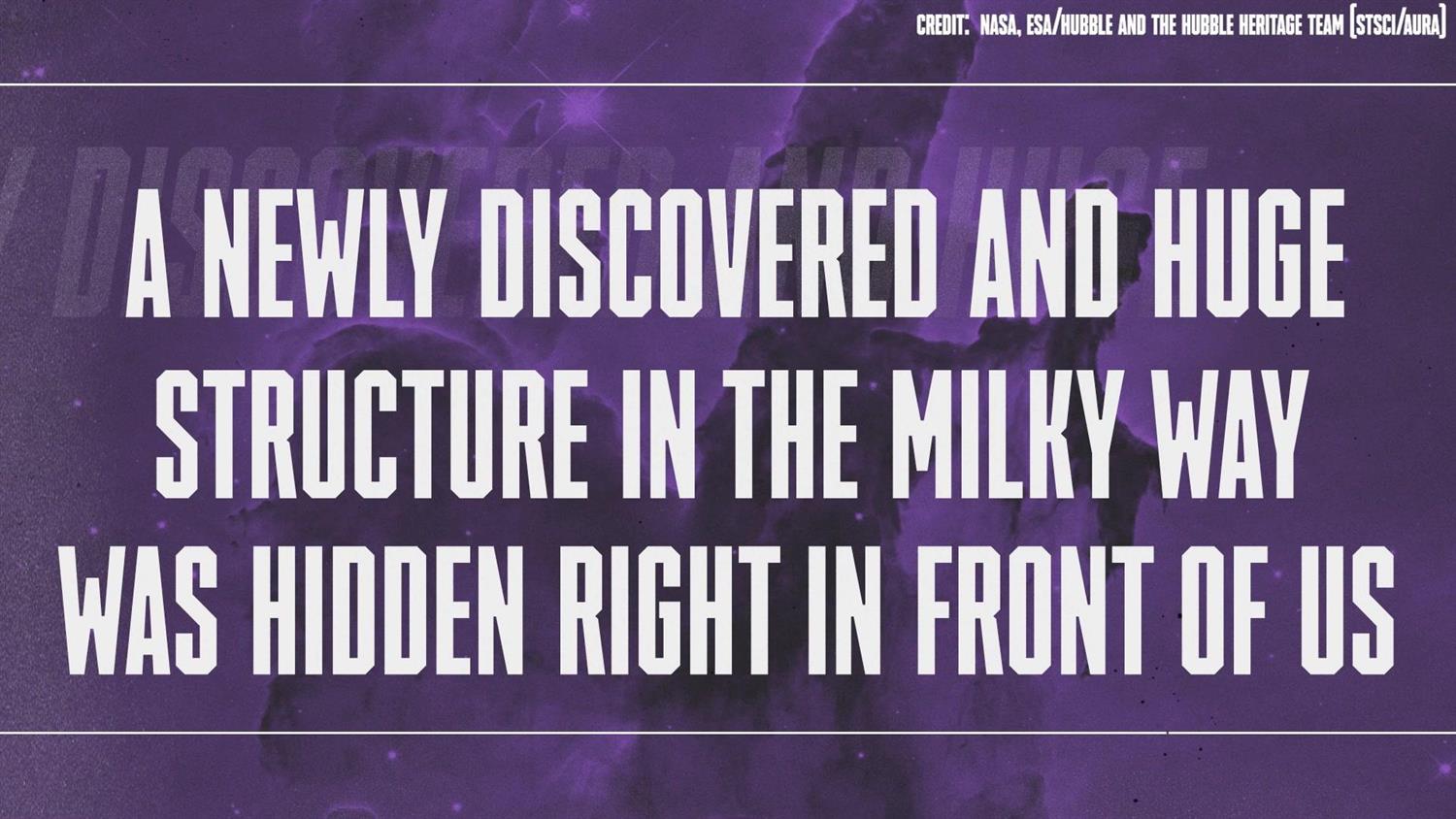 We think of the Milky Way galaxy as having well-defined spiral arms swooping around it, starting near the galactic center and smoothly stretching to the outer reaches.

However, a team of astronomers has found a big surprise: By examining stars in a nearby spiral arm they’ve discovered a new structure that sticks out from it like an unruly cowlick, and amazingly one that contains some of the most celebrated and best-studied nebulae in the galaxy. It was hidden in plain sight all along, like finding a secret treasure-filled chamber in a house you’ve lived in all your life.

The Milky Way is a barred spiral galaxy: It has an elongated Tic Tac-shaped center (called the bar) and two major spiral arms sweeping out from it. There are also a number of thinner minor arms as well, including the Orion Arm, which is the one our Sun and solar system are currently in, and another closer to the galactic center called the Sagittarius Arm. These arms are common in galaxies, though how they form and are maintained is an open question. We do know they contain lots of gas clouds (nebulae) that form stars, many of which are hot and luminous, making the spiral arms of a galaxy pretty obvious.

A map of the Milky Way galaxy showing the Sun’s position (center) in the thin, minor Orion arm. The minor Sagittarius arm starts on the other side of the galaxy (upper left) and curves around between the galactic center and the Sun. Credit: NASA/JPL-Caltech/R. Hurt (SSC/Caltech)

Models of the Milky Way structure show these arms to be well formed and relatively smooth in shape. However this new discovery throws a monkey into that particular wrench.

The astronomers in the new study wanted to look a the detailed structure of the Sagittarius Arm, so they looked at archived data from the Spitzer Space Telescope before the mission was ended to search for Young Stellar Objects: newly born stars, since they preferentially form in arms. They limited their search to the region of the sky in which we see the Sagittarius Arm and identified over a thousand stars, about half of which were clustered into groups.

They then turned to the Gaia mission, which has mapped the entire sky and found highly accurate positions, distances, and motions of well over a billion stars in the galaxy. From this they created a 3D map of the Sagittarius Arm, and that’s when the new structure suddenly popped up.

A new structure has been found in the Milky Way: An elongated feature that sticks out from the thin Sagittarius spiral arm at an abrupt angle and which contains many famous objects like Eagle, Omega, Trifid, and Lagoon Nebulae. Credit: NASA/JPL-Caltech

It’s shaped like a shoebox, roughly 3,000 light years long — long enough to stretch into the region of space between spiral arms — and centered about 5,000 light years from the Sun toward the galactic center. The motions of the stars inside it are all consistent with each other, indicating this structure is indeed real and not some perspective effect.

It really does stick out, too. We talk about the pitch angle of a spiral arm, meaning the angle at which it opens (deviating away from a circle, which would have a pitch angle of 0). The Sagittarius arm has a gentle pitch angle of 12°, but this new feature juts away at a sharp 56°.

I was shocked to read that this structure contains four of the most prominent and celebrated objects in the sky: The Eagle, Omega, Trifid, and Lagoon Nebulae. These are all close and bright star-forming gas clouds, easily visible in binoculars, and ones I’ve spent some time observing myself with my own telescope. The Eagle includes the famous “Pillars of Creation,” a heavily studied object; the others are well observed too, so it’s a little surprising this feature has been missed.

However, distances to objects like nebulae can be hard to determine. This new work identifies stars in the nebulae (the groups mentioned above) and uses their distances as proxies for the distances to the nebulae.

A Hubble image of the magnificent “Pillars of Creation”, a star-forming region in the Eagle Nebula. Credit: NASA, ESA/Hubble and the Hubble Heritage Team (STScI/AURA)

This new structure looks very much like a spur to me, the name given to straight(ish) features that stick out from spiral arms and which are extremely common in other galaxies. However, nothing like this has been seen before in the Milky Way!

That may be a selection effect, an observational bias because we’re inside the Milky Way, making it hard to map out the structure. All those huge clouds of gas and dust in the galaxy block our view in visible light, so we have to go to infrared and radio wavelengths to see them. Even then, getting distances can be tricky, which you need to know to determine where a specific structure might be. Gaia data have revolutionized our ability to do this.

Because of that I suspect that while this structure is a first for the Milky Way, it won’t be the last. I’d bet decent money more will be found as more data are analyzed in this way.

The big question is, what formed this? It’s not clear. If there’s a lot of mass concentrated into one spot in a spiral arm it can become unstable and get stretched out by shear forces, and the math works out for this structure, but that doesn’t necessarily mean that’s what caused it.

More observations are needed to see just what’s in this specific structure and if there are others like it in other arms. If trends can be found then perhaps its formation mechanism can be teased out.

It’s really pretty surprising to find such a big feature that’s so close and so obvious once it’s mapped out, especially one that has so many bright and fantastic nebulae in it.

Just when you think you know a galaxy, something like this comes along. I hope a lot more do, too. The Milky Way is an enormous object. We’ve only just started to begin to explore it.