We've been fascinated by Bane's freaky The Dark Knight Rises mask ever since we saw it, and it was even more terrifying on the big screen. But according to a page of rough sketches, the filmmakers initially had many more variations of the iconic facewear they were willing to try.

We don't know exactly who drew the thumbnail sketches, but the page is apparently found inside the new book The Art and Making of the Dark Knight Trilogy. There are nine variations in all, and you can check them out right here: 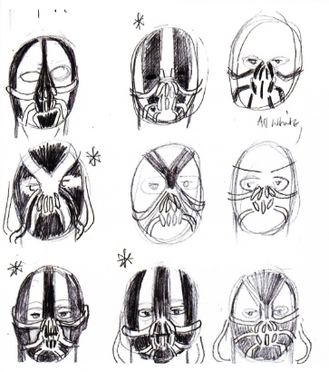 Eventually Bane settled on a model close to the sketch in the bottom right corner of this page, and it turned out pretty well. But you have to wonder if any of the others might have worked even better, and if the filmmakers went far enough to test other designs on Hardy's face.

What do you think? Would you have preferred any of these designs over what Nolan wound up with?