No one told Stargate Universe star not to reveal spoilers

Stargate Universe star Robert Carlyle fortunately didn't get the memo saying that stars of sci-fi series shouldn't tell reporters what's going to happen, and he was only too happy to share with us a raft of spoilers for the upcoming Syfy original series.

Carlyle headlines the ensemble cast as Dr. Nicholas Rush, the reclusive leader who is responsible for an accident that sends a group of soldiers, scientists and civilians through a Stargate onto the runaway Ancient starship Destiny. Needless to say, there are spoilers ahead!

Take one recent episode. "I was floating in a tank, and that was kind of bizarre, in actual fact," Carlyle said in a group interview last month at Comic-Con in San Diego. "A bunch of aliens actually got me. Of course, Rush is left on a planet, which is what he deserves, and then the aliens come and pick him up and stick him in a tank. So that's where you suddenly pick me up again, floating in it. So that was quite cool."

But wait, there's more. "We do all die, and then we come back to life," Carlyle revealed. "It's a very, very interesting episode written by Robert Cooper called 'Time.'"

Also look for Stargate SG-1 star Richard Dean Anderson to return to his old stomping grounds, reprising the role of Gen. Jack O'Neill. "He was lovely," Carlyle said. "He really was. He was very humble about the whole thing, in fact. I think he also understood, very quickly, that this is a different thing. He said it was a different show from the one that he had been used to, and, of course, Gen. O'Neill comes back. I think that he's in four or five of the episodes, but you don't actually need to know who the guy is at all. He's so solid with his character, and that's fantastic to act with." 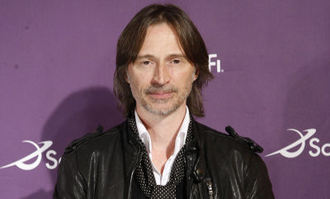 SGU is built around the same mythology as the two previous Stargate series but is nevertheless intended to stand alone for viewers new to the franchise. "I guess we have to obviously give a nod to SG-1 and Atlantis, because we wouldn't be here if those shows hadn't been there," Carlyle acknowledged. "I don't think it's necessary to have watched any of that, at all, in fact. I mean, I guess you have the issues of this general, and even if you hadn't seen him before, he would just seem like another character, so we don't have to be familiar with the past to take on the future."

Aboard the Destiny, the major friction will take place between Carlyle's Rush and Col. Everett Young, played by Louis Ferreira. "Myself and Louis Ferreira are together a lot, and we go on extremely well, because we have to, because we're at each other's throats," Carlyle said. "It's very, very tense stuff."

Younger characters provide passive-aggressive tensions for Rush. David Blue plays Eli, a genius slacker. "Rush is kind of like Salieri, and Eli is a Mozart," Carlyle described. "That's what's going on. He needs this boy. This boy is probably much more clever than him, but he's not going to let him know that."

Rush might seem hardened or gruff, certainly antisocial, but Carlyle said he is not mean or vicious. "I think he's got a wicked sense of humor, but he keeps pretty much to himself," Carlyle said. "I don't think he's the kind of guy who takes pleasure in other people's discomfort or anything like that. He would be quite happy on his own. He's troubled in terms of his wife. His wife is dead, and he wasn't exactly there for her, and this is what caused an awful lot of Rush's problems. He's a very, very lonely man."