Despite some recent box-office success, the Batman franchise was a creative mess when Christopher Nolan stepped in to reboot the whole thing with Batman Begins in 2005. But did you know he wasn't even thinking of a sequel when he shot the flick's Joker-teasing finale?

Talking with The Hollywood Reporter, Nolan discussed the now-iconic final scene, where Batman finally takes up the cowl and finds a Joker card at the scene of a crime. But according to Nolan, he wasn't really planning on making a sequel with the Joker—he just thought it was the perfect place to end the film, letting audiences know that his classic adventures are yet to come.

Here are his comments:

"When we reveal the Joker card, that very much felt like the appropriate ending for Batman Begins. It wasn't really about setting up a sequel. I wanted [the audience] to leave the theater with their minds just spinning. Batman has arrived. That was always the snap of the ending. It wasn't really until months after the film came out that I said, 'OK, now I want to know who the Joker is'...

Previous incarnations of Batman -- particularly Tim Burton's very brilliant films -- were based on creating a very gothic world in which Batman felt quite natural. We were trying to do something very different when we came to do our version of Batman. We wanted to have an ordinary world so that the figure of Batman would stand out and be extraordinary."

It's interesting to look back at the development of Nolan's first Batman, which was a creative risk and a huge departure from what had come before. But anytime a movie rakes in $347 million worldwide, the studio is much more open to making a followup. 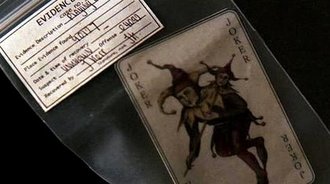 What did you think of the Batman Begins finale? A good end in its own right, or a better setup for a sequel?