Now that he's seen it, what does Steven Moffat think of Elementary?

With the release of Elementary's first footage and first official pic, it was inevitable we'd hear from Steven Moffat. After all, the upcoming CBS series was clearly "inspired" by the extremely popular and beloved BBC series Sherlock.

So what does Steven Moffat actually think of CBS's own modern take on the Sherlock Holmes brand?

According to the Doctor Who and Sherlock showrunner, Elementary now seems to be too far removed from the original source material—which, honestly, should actually be a relief for Steven Moffat and company, who feared that CBS's take on the popular sleuth would be too close to their own series.

This is what Steven Moffat said of Elementary:

If you guys will recall, there was a lot of hoopla surrounding this American take on a modern-day Sherlock Holmes, especially since CBS had approached the BBC for the project first—the BBC even threatened to sue CBS if there were too many similarities between the two series.

"It's a slightly odd situation because [CBS] approached us to do an adaptation and we declined, then, coincidentally, they announced they were doing an updated version of Sherlock Holmes," Moffat had said. "I don't want it to sound like Mark [Gatiss] and I don't want other people to try this. We welcome it, but don't damage the brand."

While Jonny Lee Miller's spin on Holmes seems to be (thankfully) removed enough from Benedict Cumberbatch's own icy-cool take on the famous detective, the character still feels like a mixture of House (a series with a modern but medical take on Sherlock Holmes) and Cumby's Holmes. But, you know, with a big-ass tattoo, a bit of scruff and a plaid scarf. 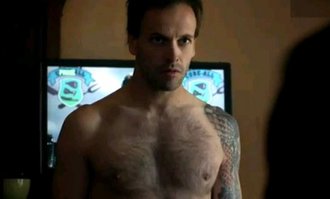 So there you have it.

What do you guys think?

(The Insider via Radio Times)