Joss Whedon, creator of Fox's upcoming sci-fi series Dollhouse, told reporters that Fox brass were initially hesitant because of the suggestion that its main premise—beautiful people performing illegal services for rich clients for a fee—resembled prostitution.

Asked at New York Comic Con over the weekend whether the network had any issues with a show about beautiful women fulfilling the fantasies of rich men, Whedon replied: "Well, first of all, it's not just women. It's women and men. And, secondly, yes. There was, ... in the ranks, some consternation when the show was being made. 'Say, that looks like prostitution.' And my response was 'Yes, that's part of the package. ... That is part of what's going on with Dollhouse.'... And some people have been greatly offended by that and want to stay away from it."

But Whedon said that's the point. "My response to it is to take it head-on," he said. "Let's talk about the fact that it's exactly that and say how much of this is morally reprehensible and how much is how we as an American culture deem it morally reprehensible. The whole show is about what parts of our identity and the way we behave with each other are actually positive and decent. What parts actually come from ourselves, and what parts have been socialized? What parts have we been told are good or bad? And that's a theme you'll find in ... a lot of my work. What truly is a sin? I would like to subvert that and take a hero, and find out what is dark and strange and Canadian about him." He laughed. "To be able to talk about [prostitution] in a science fiction show, ... dealing with sexuality comes from Eliza [Dushku]. She said, 'I want to deal with sexuality on the show. I want it to be part of what we talk about.'"

Joss was asked if whether there will be a gay character, as there was in his earlier show Buffy the Vampire Slayer. Whedon said this was a different scenario in that entire personalities are being wiped and replaced. "We're coming at it in a different way," he said, adding: "What they're basically doing is hiring somebody for an experience that absolutely no one in the world would ever know about, including the person that went through it. It's not something we got to touch on [this season]," though he implied that it would be covered eventually.

This story continues below the image. 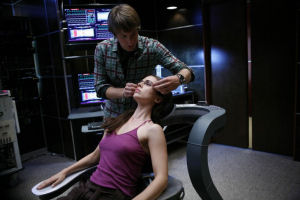 Whedon also talked about how TV has changed since his earlier shows, including Buffy and Firefly. "Producing television has changed a lot more than I expected it to in five years," he said, adding: "And this, my old fat-guy reunion tour, ... it's changed because of the scramble that all of us are forced to go through to keep advertisers in the age of TiVo, to figure out how to use the Internet and webisodes. Everything behind the scenes must be documented."

Whedon added: "When I started Buffy, they weren't putting shows out on DVD. When I started Firefly, they weren't putting failed shows out on DVD. And now, you pretty much pick your nose and there's a DVD. ... So it's a little overwhelming, to say the least. Give us a director's cut, and then we'll cut there, and we'll have a B camera the whole time, and webisodes, and just turning on a television show is more than we can handle. And they keep saying, 'This will drive business for the show.' And I say, 'What if the show is crappy when they get there?' So, for me, I get a little shirky about it. Let's concentrate on what's important. ... [With Dollhouse] we don't have a longer cut because we have a longer show. The show is 10 minutes longer than traditional shows."

In Dollhouse, a top-secret organization wipes the memories of its agents, called "actives," then implants them with new personalities to perform "missions" for paying clients before wiping their memories again when they are finished. The show centers on Echo (Eliza Dushku), an active who is beginning to become self-aware.

Whedon, whose previous TV efforts were marked by a deft mix of humor and drama, acknowledged that the tone of Dollhouse is a bit darker, but insisted that humor would still be part of the mix. "There is actually a great deal of humor in the show," he said. "Not up front, because we wanted it to feel more realistic and more, sort of, now. ... But having said that, we devolve into idiocy rather quickly. It's what we do best." He laughed. "We're having fun with these characters." He says the funniest scenes are between FBI agent Paul Ballard (Tahmoh Penikett) and Echo, since every time she meets him is the first time for her.

Whedon also talked about other projects, including his much-discussed proposed horror movie Cabin in the Woods. He explained that recent comments about it were a joke and that this was his attempt to make a "balls-out" horror film. He didn't give any clues to the story or reveal whether the script that is currently making the rounds is a fake, as has been suggested.

We also asked him about Neil Patrick Harris' comments to SCI FI Wire about being interested in the possibility of a cameo role on Dollhouse. "I don't know if he's that talented," Whedon said, obviously joking. "Any chance to work with Neil ... I would jump at instantly. He apparently plays on another series [CBS' How I Met Your Mother]. But we have to make sure he knows that I know."

As for plans for a sequel to his Web hit Dr. Horrible's Sing-Along Blog? "There are dreams, there are schemes," Whedon said. "We don't have anything planned yet."