Odette Yustman is a screamer in The Unborn, and she's not shy about it.

The Unborn star Odette Yustman isn't a household name—yet—but if you saw Cloverfield (she played Beth), you know the girl can scream.

In her next movie—writer/director David Goyer's horrific supernatural thriller film—the comely brunette does even more screaming—not to mention running, thrashing, rolling around in slime, having giant potato bugs crawl all over her and falling down.

Little-known sci-fi fact: Here's what Nolan originally planned for his Batman trilogy
Batman vs. Superman writer reveals who he thinks would win in a fight

And, in a scene certain to become a horror movie classic, she has a medieval-looking medical device stuck into her eyeball. Director Goyer smiles broadly when asked about subjecting the poor girl to such treatment. How'd he do it? He just didn't tell her what was going to happen until she got to the set that day.

"I would spring that on her," Goyer says. "I used to spring that on her at the last minute, and, in fact, that particular day, we were in an ophthalmologist's lab, and the ophthalmologist was our sort of tech advisor on the day, and I said, 'Is there anything really uncomfortable we could do to her now?' And he said, 'Well, I could put this speculum thing in her eye.' So right before we rolled, I said, 'You know, honey, we're just going to do this little thing. It's fine, and ... we're rolling.' She was like, 'What, what? What are you doing?' I said, "It's OK, we're just going to do one take, and I'll do it, too.' Then we did like eight takes, and then we ran out of time." Goyer's grin shows he takes almost too much glee in the scenario. "No, I didn't do it."

But Goyer is nevertheless effusive in his praise of the 23-year-old actress from Los Angeles. "We saw over 100 actresses for [the lead role of] Casey," Goyer says. "And Odette was just far and above the best one that came in. She's a really great actress. She's a fresh face. I think she's got a very exotic beauty to her. I think the camera loves her, and audiences find her sympathetic, so it was pretty unanimous when she did her audition. Everyone wanted her." And she screams real good: "I will tell you, all the women, we made them scream at the end of their audition. My point was it's not specifically that you have to be a good screamer, but I needed to know that the actress would go there, so if you're not willing to scream in front of the three of us then you're not going to be willing to do that in front of 200 crew members."

We spoke exclusively with Yustman about the movie, in which she plays a high-school girl who finds herself haunted by a malevolent spirit that may or may not be her unborn twin. Along the way, Casey uncovers her family's history of hauntings, a curse dating back to Nazi wartime experiments and a Jewish exorcism rite. The Unborn also stars Meagan Good, Cam Gigandet and Gary Oldman; it opens Jan. 9. Following is an edited excerpt of our interview with Yustman.

It must be tough to find the reality in such a fantastical story.

Yustman: Yeah, absolutely. You know, I guess the thing that I wanted most out of this role and for people to understand was that ... she's really just a normal girl, you know? The girl next door. She's a babysitter. ... She has her normal friends, her boyfriend, and she ... definitely was a little tormented. Her mother, she thought, killed herself, and ... she was always a little bit lost. But once ... things started happening to her, ... she has these dreams and these hallucinations. It's just like I wanted to make her seem as real and as genuinely terrified and scared as possible. Because I think that's where most of the fear comes in: When ... you don't know what's going to happen. And the unknown is ... so much scarier than anything. I mean, at least for me.

It looked like this film was very physically uncomfortable for you.

Yustman: Oh, yeah. I mean everything was really, really uncomfortable. Like the potato bugs and the speculum in the eye and ... the running and having to deal with the weather conditions. I was really just freezing cold. ... We were shooting in these crazy locations that were actually really, really scary, so, it was really easy for me, in that sense, to get into the character, because it was kind of all set up that way. ... 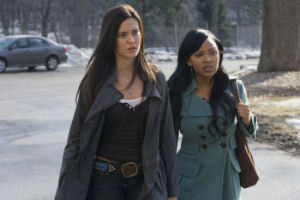 Did David sort of creep you out with stories about some of the research he did into Nazi experiments and Jewish exorcism?

Yustman: He really did a lot of research, and you know, telling me about all the exorcism and then dating back to Auschwitz and ... the Holocaust, it was just really creepy. ... He talked to some rabbis and just really did his research. Which, you know, helped me so much getting into the character. ...

You went on YouTube to look at videos of an actual exorcism.

Yustman: Five years ago, or not even, there was no YouTube, so you couldn't really even see any of these things. You could maybe go to the library and research there, but I thought, more so than books or anything like that, I thought I would go to YouTube and actually see some actual footage of real exorcisms that were being performed by real people. ... That really helped me prepare and ... see what actual people, even if it was real or not, went through. ... It was so creepy, because I was doing it by myself. I was in my bedroom watching it, with the lights off. I don't know why I decided to do that. I ... had to literally shut the thing off, because it was like weird noises were coming out of people, and they were screaming, and it was so scary.

And all this weird stuff happened on set, too, including an actual earthquake while you were shooting in an old abandoned mental hospital in Chicago?

Yustman: Yeah. I mean, what was that about? We would hear noises, and people whispering and talking while we were shooting. We were like, "What's going on here, why can't people just pull it together?" Right? And then we would get ahold of everybody, nobody was talking. And it was clear that there was some sort of something, you know, while we were shooting. And then ... one of our crew guys was walking down these stairs and took a picture, and when he developed it, or when it showed up on the digital camera, it was like two hands that were like grabbing on to some[one]. It was so terrifying. And lights would go on and off. There was an earthquake in Chicago. You know, there's just too many weird things happening.

A lot of times on these kinds of movies people make this stuff up, too.

Yustman: Oh, yeah. Not me. I'm like, this is the real deal. Like maybe some people, I mean, maybe they were joking around with me, who knows what kind of s--t they were trying to pull. But I was scared.