On set: The Losers is sex, violence and Zoe Saldana

On a hot, balmy day in Puerto Rico, the smell of sweat, metal and ammunition permeate the summer air. Today The Losers are being lined up for their execution, but we have a hunch they might make it out of the sticky situation.

We're on the set of the new comic-book-based action movie, which stars Watchmen's Jeffrey Dean Morgan and Avatar's Zoe Saldana. The Losers is based on a comic by DC's Vertigo, the story of an elite special forces team targeted as part of an evil plan by one-named villain Max (Jason Patric). Betrayed and thought dead, the ragtag group of colorful characters teams up with a rogue operative named Aisha (Saldana) and sets out to enact their revenge. (Idris Elba, who plays Roque, is the sixth member of the group. Unfortunately he wasn't on set during our visit.) (Spoilers ahead!)

On this day, massive orange and blue shipping crates sit stacked three and four high around the group, closing in the area like an alleyway. In the distance, Old San Juan reflects the relentless afternoon sun. The locale is doubling for New Mexico, so cameras are careful to avoid any distinctive landmarks.

"This is towards the end of the movie," Evans says. "We've been captured by the man who set us up, and we think we're about to kick the can. And I don't want to give too much away, but I'll say Zoe [Saldana] comes and saves the day and kind of gets us out of a hot situation."

"We tried to take this facility and we basically got caught," adds Short. "And I get shot in both my legs. Pretty intense."

The movie tells a simple story. "It's about this group of guys who kind of get set up," Morgan says. "It's a story of revenge, and I'm the leader of this group, Frank Clay, a special forces colonel."

Produced by action guru Joel Silver, The Losers is directed by Sylvain White (Stomp the Yard) from a script by Peter Berg (The Rundown, Hancock) and James Vanderbilt (Zodiac).

White, who is best known for his dance flick Stomp the Yard, might seem like an unusual choice at first glance, but the director professes to being a geek from way back. In fact, he was previously linked to an adaptation of the video game Castlevania and is currently developing Frank Miller's Ronin for the screen. 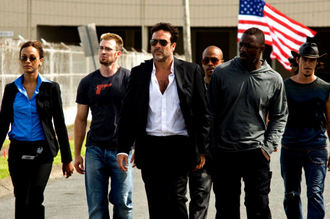 "I heard about the project [and] I read the screenplay and all the volumes of the graphic novel, and I just fell in love with it," White says. "It's more like the graphic novels I grew up reading in Europe. That's why The Losers appealed to me. It was a chance to do a really good adaptation of a comic book and stay true to the source without veering off and making it too Hollywood."

The comic series didn't pull many punches in terms of violence and bloodshed, causing some fans to voice concern over the film's PG-13 rating. "To tell you the truth, the studio's intent was to make it an R-rated movie," White explains. "It was actually kind of my idea to make it PG-13. I wanted teenagers to be able to go and see this film. I felt there was a certain amount of violence in the graphic [novels] and that it could still be cheated on screen so you could still have a hard PG-13 and open up your audience."

The director promises the rating isn't forcing him to pull back a whole lot and that much of the additional violence will wind up on an extended version of the movie. "You saw the scene today where Pooch gets shot in both legs," says White. "We do insert shots where it's just squib and blood squirts, where you actually see that. That's a shot where we'll see if it gets past the rating, but if it doesn't, we'll put it on DVD."

White adds, "the beauty of the American ratings is that you can shoot as many people as you want so long as you're not showing too much blood. We're not holding back from the amount of kills or the amount of deaths."

Saldana is riding one hell of a hot streak after last summer's Star Trek and the recently crowned box office king, Avatar. The actress says those films gave her a taste of action, and now she wants some more. "After Avatar I became like a beast for action," says Saldana. "I'm so hungry for it, and I want to do all my stunts. I'm all bruised up and everything. I'm still at that phase where I want to do everything myself and get beaten up."

Saldana's character, Aisha, is one of the most mysterious members of the group. She's tough as nails, but she's got a love/hate relationship with Clay. "She's a snake," says the actress. "You don't really know what she's hiding up her sleeve. She's trying her best to play her cards right, but Jeffrey's character just gets to her. There's just something about him." 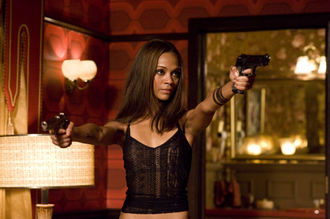 As we await our next interview, there's nothing like a massive explosion to distract us from the heat. Just before the heroes our executed, a big fiery blast caused by Aisha distracts the baddies. While the details of the scene aren't entirely clear, suffice it to say there is a lot of gunfire and fisticuffs to follow.

Though we didn't know it at the time of our visit, we would next chat with the newly crowned Captain America, Chris Evans. In The Losers, he gets a bit of a breather from the action before he'll be lugging around the famous starred shield. His character, Jensen, is a sarcastic joker better known for his computer skills than his brawn. "He's pretty crazy," Evans says with a laugh. "He usually wears very bright colors and Hawaiian shirts, and he has bleach-blond hair and this ridiculous facial hair. He's the goofy one, [and] he doesn't take things too seriously."

In real life, Evans admits he is far from computer-savvy. "I can barely check my e-mail," the actor says. "I know dick about computers. I'm just clunking around like I know what I'm doing, but I think I pull it off."

As the star of the show, Morgan is dressed in a tattered Men in Black-style suit and tie and says he doesn't mind the extra workload of a leading man. "It's been awesome," Morgan says with his wide Cheshire Cat grin. "Other than the unrelenting heat that you're now experiencing, it's fun getting to work every day, unlike Watchmen, where I worked once a week. It's a lot of time to interpret this character and have fun with it."

The actor promises The Losers will be a bit of a throwback action flick, the kind of movie that he would pay to see. "There's a lot of kicking ass, a lot of explosions and lot of fights," he says with the same big grin. "[It's] a lot of all the stuff that we go to movies for. This is is Joel Silver doing what Joel Silver became [famous for], with the Die Hards and the Predators. It's very much a movie reminiscent of those old kind of action movies. There's some tongue-in-cheek humor and a little sex. All that stuff that we like. All the stuff I like."

The Losers opens in theaters nationwide on April 23.

(Check out the new character posters for The Losers in the gallery below; click to enlarge.)