What's next for Futurama? Oh, no! Bender's going to DIE!

You can expect an epic half season of drama when Futurama returns with all-new episodes beginning tonight on Comedy Central, promises executive producer David X. Cohen. Just how dramatic is it going to get?

WATCH: Everything you didn't know about Futurama
Futurama is coming back, just not as a TV show or movie

Well, the crew of the Planet Express switch genders, the show goes anime, and Bender will die.

Gender bending, death and anime? That does sound pretty epic.

"Obviously, as is usually the case, we thought this might be the end of Futurama, so we wrote the last couple, once again, as though it might be the end and we'd be satisfied internally if those were the last episodes," said Cohen in an exclusive interview.

To kick off the new 13-episode season 6B, we'll get two back-to-back episodes tonight, beginning at 10 p.m. 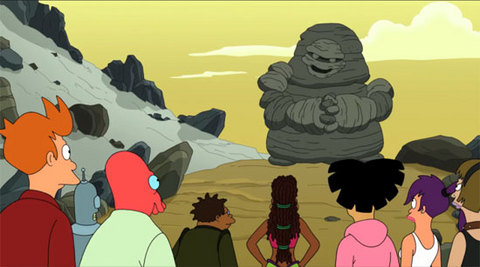 And in the second episode of the night, "Benderama," "Bender figures out how to self-replicate and begin making ever smaller and smaller copies of himself in ever greater and greater numbers. And, of course, to replicate he needs to keep consuming matter, so there's a danger that as he reproduces ad infinitum that he may consume all the matter on Earth and replace it with Benders," said Cohen. "It's the sci-fi concept of gray ooze we're referencing. Basically that any kind of self-replicating machine that gets out of control may convert everything into a gray ooze. Bender, being kind of gray, is appropriate for the subject." Comedian Patton Oswalt guest-stars as a creature called Unattractive Giant Monster.

However, the really big episode happens next week when Cohen and his writers kill off Bender in "Ghost in the Machine."

Really? Cohen, you're actually killing off Bender this time? For real?

"I know. It's terrible. And yet his software continues running in a ghostly way that haunts the planet. Bender's ghost, of course, has to make a deal with the devil. Dan Castellaneta (the voice of Homer Simpson) is back as the Robot Devil."

Okay, maybe we'll forgive Cohen, as long as he brings Bender back from the dead, especially by way of Castellaneta.

After that we get "Law and Oracle," which draws some inspiration from Minority Report. "We have Fry joining the police force and being assigned to the future crimes division, where they try to predict crimes. And we have a great Tron-like sequence in there, with Fry in a chase on his police cycle device."

And just to add a big season-finale teaser, here's a taste of what the end of the season holds.

The final episode, "Reincarnation," "is a special three-parter, three mini-parts, where we see Futurama re-envisioned in three alternate animation styles. We see Futurama as a classic black-and-white cartoon, and then as an old-school videogame style of animation, like the '80s level of resolution. And then finally we have the Japanese anime production." Comic-Con attendees will actually get a chance to see the anime section of the episode at the show's panel as a little Futurama-style present to the fans, said Cohen.

In addition, this season there will be awesome guest stars, including astronaut Buzz Aldrin and theoretical physicist Stephen Hawking, in his third appearance.

Beyond all that epic-ness, Cohen has one other promise for us.

"We have our entire writing staff back again, and our entire cast, so everybody should rest assured the same entire team is still in place. No changes," he said. "So once again, if you like what we're doing, we're going to attempt to give you more of the same."

Comedy Central has already renewed Futurama for a seventh 26-episode season, which will likely air over 2012 and 2013.

Here's a sneak peek of "Neutopia":

Here's a look at "Benderama":

Are you going to watch tonight?