A new poster for the Fringe series finale has been released, and it looks like the team will be whipping out some old-school freaky to take out the Observers this week. Mild spoilers ahead!

The two-hour series finale airs this Friday, and judging by the teaser attached to last week's episode, we'll be heading Over There one last time for some alt-dimension backup.

But the new finale poster doesn't tease that trip. No, it hints at something even more old-school—the fringe event from season one involving a chemical that closes all the bodily orifices. Looks like the gang will be digging back into the archive for the final battle for humanity's fate.

Aside from that brief teaser, that's about all we know about what's coming this week. But executive producer J.J. Abrams described the finale to TV Line as "highly unexpected, incredibly emotional and a fitting conclusion to the series."

Check out the creepy new poster below! 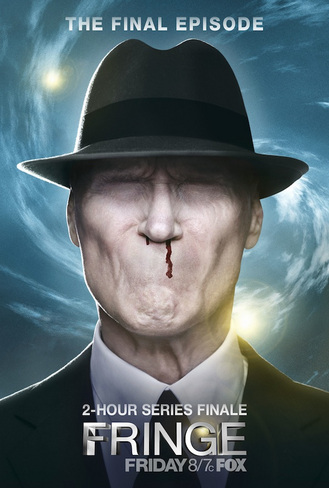 How do you think it will all end?