Roberto Orci and Alex Kurtzman, co-writers of J.J. Abrams' upcoming Star Trek movie, told SCI FI Wire that they view the film as both a prequel and a sequel, that they strove not to violate canon and that they focused on the central characters at the heart of the story.

In this second part of a three-part exclusive interview, Orci told us, "It's 43 years of material, multiple television shows, 10 movies. And ... when we went back to look at all the material, we realized that no one had ever really done—at least at any of the shows or movies—the first adventure of how the starship crew came together. So when we found that, ... we realized that's going to be the way to both please fans—who've been ... stewards of this franchise for so long, because it's a story they've never seen, so it's not merely a remake."

Following is an edited Q&A with Orci and Kurtzman. Star Trek opens May 8. (You can read the first part here and the third part here.) (There may be spoilers ahead!)

What, in your mind, in broad terms, was crucial to keep in order to make it feel like Star Trek, and what did you feel you could change or alter or get rid of and not lose what was Star Trek?

Kurtzman: Tone was a big part of it. ... There were certain elements that seemed very ... universal in all Trek iterations that we felt ... needed to be represented in our version. Certainly, the bridge crew as a family was one of them.

Orci: You mean, too, their specific characters. We didn't feel that we could change their characters very much. Spock had to be Spock, Kirk had to be Kirk, Bones had to be Bones, Uhura had to be Uhura, Scotty Scotty, Chekov Chekov. ... So it was "Just how do you keep the same character in a new situation?"

Kurtzman: Also, Trek in all forms, despite dipping into darkness here and there, is ultimately a very optimistic vision of the future, and that is something that we felt we needed to preserve.

There was an inherent difficulty, of course, in the initial premise that Gene Roddenberry set out, which is if you have a utopian Earth society, you don't have opportunities for much dramatic conflict unless you're running into hostile aliens or something. Did you find the same kind of issue in approaching this kind of story, or did you just not think about that part of it?

Orci: Well, the world that we render in terms of the world that we all live in in Star Trek is, I think, in our version, a little bit closer to our world today than it is to a utopia. Now, that doesn't mean that it's not optimistic, but I don't think that it's quite as utopian as it's been imagined in some iterations. And across canon you can see that the utopia is relied upon to varying degrees, and sometimes not at all through the movies. So we wanted the world in which our movie begins—and you can see this through some of the trailers that have been selected, the idea of young Kirk driving a car on the road—imagery that you're not even sure if you're in the future for a minute. So it was very consciously trying to make the world as close to ours as possible with, you know, significant advancements toward utopia, but not utopia. 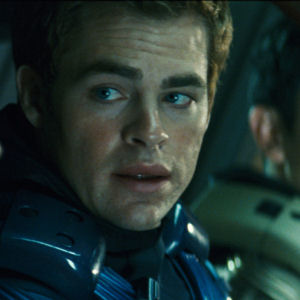 Let's talk about the three central characters and how your approach prefigures the characters people know and the arcs that they will travel to get there. The first character being Kirk, played by Chris Pine.

Orci: Well, the great thing about Kirk is that when you first meet him in the show he's already captain. And he is already extremely disciplined, and he has already kind of drunk the Kool-Aid of Starfleet. So knowing that's where you're going to end up, we realized, "Well what a great opportunity to see exactly how he gets there. And if that's where you end up, what does the drama require?" Well, it requires you to start the character ... as far away from where he ends up as possible. So that prescribed an approach to the character that allowed us to see Kirk in a way that has never been seen, but that hopefully is going to connect back to the Kirk you know.

Clearly there have to be some character elements of the Kirk we know, even in the early person.

He was also kind of a hothead.
Orci: Yes and no. Again, he's a hothead when he's not in charge, or when he is cornered.

Next is Spock. And you have the advantage in this film of having the two Spocks. You see where he's going to end up (Leonard Nimoy), and you've also got the Spock (Zachary Quinto) before he becomes the Spock we know.

Orci: True, although it's a tricky thing there. But, similarly, with Spock we pick up before you ever met him. As a kind of a half-human son of a human mother and a Vulcan father.

Kurtzman: That was really interesting to us, because it felt like that had never fully been exploited. The conflict of the character being born of two worlds and being torn between them felt like an extremely rich territory for a character who had not yet fully accepted which half he was going to be, if either. And, you know, in a movie that's about, in many ways, these people becoming the characters that we know, he should not have been in a contented state of existence yet. You know, so that struggle just felt like a perfect starting point for us. ...

And McCoy, played by Karl Urban?

Orci: McCoy in a way represents for us, or represented for us, the extremes of Kirk and Spock. If Spock is extreme logic, ... extreme science, and Kirk is extreme emotion and intuition, here you have a very colorful doctor, essentially a very humanistic scientist. So he, in a way, is literally and figuratively a representation of two extremes that often served as the glue that held the trio together. So knowing that as an end point, it becomes a question of ... "What would you believe are the sufficient first circumstances in which you would see McCoy, A, bond with Kirk and become his friend, and, B, also be able to see the side of the friendship that Spock brings to it, despite a potential bias?"

We always knew that Bones was a little dismissive of his alien friend. And yet, when the going got tough, Bones was fair, and he actually was a potential arbiter between the two of them. So knowing that's where we were coming at it from, to find this situation and be moments in which you would believably see that grow, again, once it's done you feel like you're sort of watching history happen.