Orci & Kurtzman: What familiar Star Trek bits will you see in the new movie?

Roberto Orci and Alex Kurtzman, co-writers of J.J. Abrams' upcoming Star Trek movie, told SCI FI Wire that they'll include some of the signature bits that fans most expect, but promise they'll be incorporated in a way that seems natural. They also address the issue of William Shatner and the former girlfriend who didn't make the cut in this first part of a three-part Q&A.

"The key is to introduce those things in a very organic way, so that the audience doesn't feel like, 'Oh, this is the scene where they design it around [that bit]," Kurtzman said in an exclusive interview with his writing partner on Monday. Kurtzman added: "It's more about creating a story so that all of those things that you are hoping you will see in the characters comes out."

Added Orci: "[They seem] inevitable, as opposed to 'We must have this.'"

"Well, do you have a list?" Orci, an avowed Trekker, asks. "Because I bet you every fan has a list of, you know, funny things."

OK, well, what about McCoy [Karl Urban] saying something like, "Dammit, Jim, I'm a doctor, not a bricklayer."

Kurtzman: You've got to have a little of that somehow.

Orci: Yup. You certainly need an engineer to struggle against a law of physics.

Orci: That would be on our list as well. Very famous.

There's got to be some kind of insult fight between McCoy and Spock?

Kurtzman and Orci: Certainly, [that] as well.

Orci: You see, it writes itself. Actually. What a great gig.

Kurtzman: We didn't really have to do anything.

Orci: Just put everything in the right order, and you're done.

Are there things that you wanted to put in that you couldn't find a place for?

Orci: Yes, there's a few little things. You know, in an early draft we wanted to potentially lay down the foundation for his friendship with Carol Marcus [Kirk's love interest, introduced in Star Trek: The Wrath of Khan], who ends up in the original continuity being the mother of his child. In an early draft she was in, and then literally because of the nature of the introductory story and making sure that our core group of characters had the proper amount of story that they deserve, she went into the potential future draft. 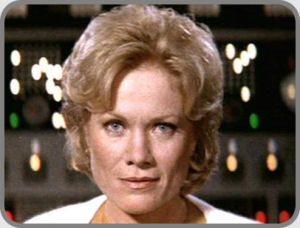 Bibi Besch as Carol Marcus in Wrath of Khan
Anything else?

Kurtzman: Yeah, well, the biggest is [Shatner] in the movie. There's been a lot of debate about that. ... We just, we really tried very hard to get him in there in a way that felt organic, but the problem was that because he died in continuity [in Star Trek: Generations], ... I think it would have felt a little bit cheap, is what we all decided. And, you know, we really struggled with it, because we wrote a scene that we really loved, and, ultimately, I think it might have felt like an add-on, you know? Whereas our story, without giving away too much, Spock [played by Leonard Nimoy] is such a critical part of the story that literally the story cannot be told without him.

Star Trek opens May 8. You can read part two here and part three here from our exclusive interview with Orci and Kurtzman about Star Trek.