Orci & Kurtzman: Why they don't call Star Trek a reboot

Roberto Orci and Alex Kurtzman, co-writers of J.J. Abrams' upcoming Star Trek movie, told SCI FI Wire that they don't consider the movie a "reboot" of the franchise or the original series and argue that the film's time-travel element was necessary to bridge the new story with everything that has come before. They also told us why this Trek may have more Star Wars in it. (Spoilers ahead!)

In this final part of our three-part exclusive interview, Orci said, "We couldn't imagine not having this movie somehow fall within some degree of continuity. We don't accept the word reboot. Reboot does not actually describe the fact that this movie would not be possible without the 10 movies that came prior to it. The very events of the movie themselves are caused by Leonard Nimoy as Mr. Spock and his story, which picks up essentially after the last movie, Star Trek 10 [Nemesis]. ... So our movie is both a prequel and a sequel. It's a sequel if you're a fan, and a prequel if you're not."

Following is the edited version of our Q&A with Orci and Kurtzman. Star Trek opens May 8. (You can read the first part here and the second part here.)

Why is the time-travel element necessary?

Orci: I don't think that fits into the classic definition of a reboot. So it was necessary for that. And it's also necessary in order to both connect the world to the original Star Trek, but then also to then give us the dramatic license and the dramatic stakes of having an unknown future in the movie.

Kurtzman: Yeah, the biggest thing I think we all hiccuped on, just conceptually, when Trek was presented to us was, "Well, we know how they all died. We know what happened to them." And when you know that, it's very difficult to put them in jeopardy in a way that feels fresh or original. How do you ever have real stakes to your characters?

Orci: We didn't want it to just seem like a historical document.

This also conveniently allows you to violate canon, such as it is, if necessary.

Orci: Well, again, it's a continuation of canon. If words have precise meaning, it's not technically a canon violation.

Kurtzman: There's also a massive amount of ... crossover. It'll be a very identifiable Trek world. With character traits and situations and backstories that are almost identical.

Orci: But the spirit of what you're saying is true. It frees us from the rigors of their known history. Without necessarily having to veer away from it all. You know, there're large sections of the movie that we would argue are true ... in both their continuity and our new one. 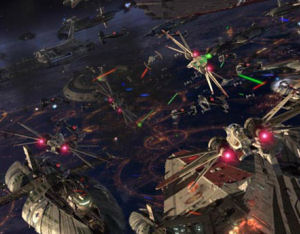 One interesting thing I think that J.J. has said in the past is that he was initially more of a Star Wars fan than a Star Trek fan. And there was some suggestion that he was trying to bring some elements of that into the Star Trek film. Which raises the question: What's the difference between Star Wars and Star Trek in your mind, and how do you use the one to inform the other? What elements of Star Wars do you see are appropriate to bring into Star Trek?

So, as a result of it being fantasy, the story, I think, was a little bit more mythologically drawn.

Kurtzman: I think what we know is that ... Star Trek is about naval battles, and, at its best, is always about out-thinking your opponent. ... But there's a reality to the way that people watch movies today. ... Which is that you cannot honestly expect ... a 12-year-old boy to walk into a theater and to go sit through two hours of very slow naval battle. It's just not going to work.

Especially in the summer, where Transformers [Revenge of the Fallen] is coming out a month later. There has to be an updating there. And yet you have to stay entirely true to the spirit of Trek. So the challenge then becomes "How do you marry those two things?" And ... the way that we put it is that there's plenty of naval battles in a way that's familiar and a way that seems very Trek. But ... the difference between Star Trek and Star Wars is that Star Wars has always been about speed. ... It's dogfights versus slow ship fights.

Kurtzman: Exactly. So our goal was to try to marry the two in a way that it didn't actually feel like it was violating Trek and also didn't feel like we were somehow pandering to the Star Wars crowd. It's just "How do you make it, again, feel organic?"

And Star Wars, the originals, originally were somehow more accessible, I think, the result of an entry point of a farmboy. You know, it doesn't matter where he is, it's an extremely relatable kind of entry point that I don't think Star Trek always had. And so that definitely was applicable in terms of how you are going to see elements of Kirk and Spock's childhood and how they ended up where they ended up. ... You start with them very much from an accessible place before they go off on their adventure. So ... it was important for all these things.

There are a couple of points that fans seem to have seized upon. One is: The Enterprise is supposed to be built in space, not on the ground. What do you say to that?

Orci: Things are built in space when expense in getting it to space is difficult. But when you have a ship that can literally cross the galaxy faster than light, getting it up 100 miles above the atmosphere is not particularly expensive. Number two, ... one of the reasons to build things in space is things don't ever have to enter a gravity, because they're going to be flimsy, like satellites are fine to build in space because they don't ever need to be in a gravity well. But because we all know warp speed itself is the warping of ... space, which equals gravitation, then you want to make sure the Enterprise can actually sustain [that]. ... It's not a flimsy pleasure-cruise [ship].

Another comment I've seen from our fans was it was supposed to be built in San Francisco, not in Iowa.

Orci: It's debatable in canon whether or not it was actually built in San Francisco. But certainly the events of our movie, when you see the Enterprise being built, [it will take place] after the time incursion, so any differences will be explained by the events of the movie.

You're not going to destroy San Francisco, are you?

Orci: I certainly hope not. It's a beautiful city. Especially in the future. It's gorgeous.