The upcoming Star Trek sequel is apparently getting a little dose of classic '80s horror. Nancy, say hello to the Enterprise.

Horror News reports that Heather Langenkamp, who played the iconic character Nancy in the original A Nightmare on Elm Street, has signed on for a small role in J.J. Abrams' Star Trek Into Darkness. 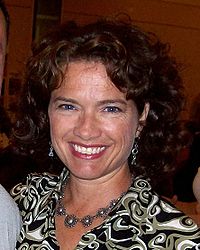 Who is she playing? We have no idea. But it's awesome to see her pop up again. Who knows, maybe Kirk and company need some dream warrior help.

Here's what she had to say:

"Well, I had the opportunity to play a small part in Star Trek, so I'm looking forward to that. I can't tell you anything about that, but that was a thrill for me. My husband and I worked on the makeup effects for Star Trek. He designed some of them, so that's the thing we're looking forward to most. Hopefully we'll be working on something else in January. We don't know what that will be yet, but hopefully it'll be a really fun job."

Who do you think Langenkamp is playing?