Thanks to an interview with Star Wars: Return of the Jedi storyboard artist David Russell, some old school design art from the film has been released in the wild. What stands out the most? The Emperor was, apparently, even creepier during the design phase.

Russell's artwork is pretty great, and it shows some of the scene concepts worked out while the film was being pieced together. The Emperor shots stand out quite a bit from the finished product and actually come off as even more menacing than the final version.

Mark Hamill confirms that he IS Sebastian Stan's father...sort of
The Mandalorian Season 2 ended with its boldest Star Wars move yet. And, no, it's not fan service. 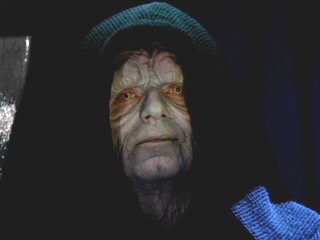 The interview itself is more career-focused that Star Wars-focused, but it's well worth a read for big fans of the original series. The story of how Russell ended up working on the film is actually pretty cool.

"Like the hundreds of other artists who were dying to work on Jedi, I was unable to get past the Lucasfilm front office," he said. "I happened to mention my problem to a good friend Jack Vance, a noted science fiction writer. It turned out that he was currently negotiating with Lucasfilm over the rights to one of his novels. Jack kindly suggested that I fly to Oakland, and he'd put a call into Lucasfilm to discuss his business, and afterwards hand the phone to me. Lacking any other option, I did as he suggested, and, probably out of consideration for Jack, ILM visual effects supervisor Joe Johnston agreed to an interview. However, he was impressed with my work—and so was Lucas, because shortly thereafter I was hired as a storyboard artist on Return of the Jedi! It was certainly a magic moment."

Check out four of the concept drawings below, and head over to The Movie Blog for the full gallery.

(via The Movie Blog)