Transformers: Revenge of the Fallen was the big "winner"—not at the Oscars, which are handed out tonight—but at the Razzies, otherwise known as the 30th Annual Golden Raspberry Awards, which recognize the worst movies of the year.

The Transformers sequel copped Razzies for worst picture of 2009 and two other awards.

More Land of the Lost

The Razzies are handed out every year on the eve of the Oscars to poke fun at the worst movies and movie performances of the year.

Transformers actually tied Land of the Lost, with seven nominations each. Astonishingly, Land was nearly shut out in every category.

But the 650 Razzie voters also managed to tie in their votes for worst prequel, remake, rip-off or sequel, and Razzie founder John Wilson cast the tie-breaking vote to throw the win to Land of the Lost. "It really did stink, and, I thought, well, it ought to get something, because it is a very bad movie," Wilson said.

The other sci-fi award went to Sienna Miller, who nabbed worst supporting actress for her performance in G.I. Joe: The Rise of Cobra.

(And check out the video at the bottom to see Sandra Bullock accept her award; what a good sport is she? Thanks, Gozer, for pointing us to it.) 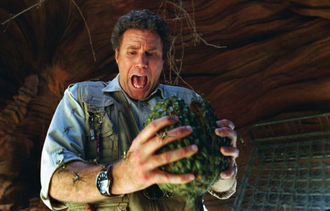 Land of the Lost

Worst Actress: Sandra Bullock for All About Steve

Worst Screen Couple: Sandra Bullock and Bradley Cooper for All About Steve

Worst Prequel, Remake, Rip-off or Sequel: Land of the Lost

Worst Director: Michael Bay for Transformers: Revenge of the Fallen

Worst Picture of the Decade: Battlefield Earth (winner of 8 Razzies)

Worst Actor of the Decade: Eddie Murphy (winner of 3 Razzies)

Worst Actress of the Decade: Paris Hilton (winner of 4 Razzies)

What do you think were the worst movies and movie performances of 2009?

For the latest sci-fi news, follow us on Twitter at @scifiwire
Tag: Land of the Lost
Tag: Razzies
Tag: Transformers
Close Search Return to SYFY homepage.