Paper Girls: The ups, downs, and why this comic was made for TV

In July 2019, readers bid a tearful farewell to Brian K. Vaughan’s 80’s infused, time-traveling comic Paper Girls after 30 issues. Paper Girls has often been compared to Netflix’s golden series Stranger Things; however, it was actually released a year prior, in October 2015, with a story about four preteen suburban girls riding bikes and delivering papers in fictional Stony Stream, Ohio.

Their lives take an unthinkable twist on November 1, 1988, when they encounter a group of mysterious teenagers from the future and a machine whose energy caused them to be shifted across several time periods in the midst of a brewing war known as “The Battle of the Ages.” The experience pushes the girls to confront their futures, examine their pasts, brave improbable threats, and form an unshakeable bond as they figure out how they fit into this bizarre puzzle.

Paper Girls is a consistently beautiful, bizarre, and brilliant journey that dives the psyche of its four girl protagonists beyond what many of their counterparts are often afforded in coming-of-age, sci-fi stories as background characters or love interests. The familiar childhood cycle between admirable bravado, fear, insecurity, and naiveté is embedded within a complex saga about factions, ongoing time wars, secret codes embedded in print, and modern-ish technology.

There are intricately interweaved subplots, well-developed secondary characters, a striking overall aesthetic appeal, plenty of 80’s nostalgia, Y2K mania, political and social commentary, and ruminations about the future alongside hilariously misplaced pop culture references, constructed languages, and otherworldly lore that somehow fits together without feeling like it overstuffs or drags the plot. It’s admittedly not a read to mindlessly breeze through, but it’s worth the extra time and attention.

Erin, Mac, KJ, and Tiffany’s blend of distinct personalities, sharp humor, misinformed viewpoints, and powerful friendship is truly a joy to read. The girls ebb from childish arguments and insults to ideology battles and motivational speeches as they take risks, face their truths, and accept accountability for their choices. There’s an incredible amount of nuance to each girl, with each serving a distinct purpose to the dynamic of the group and overall storyline.

Tiffany, a transracial adoptee attending a private Catholic school, and Erin, a socially conscious Asian-American who always follows the rules, are given the space to do more than check a representation box. Erin serves as the moral compass who makes tough calls and becomes the glue that holds the quartet together, even when they are apart. 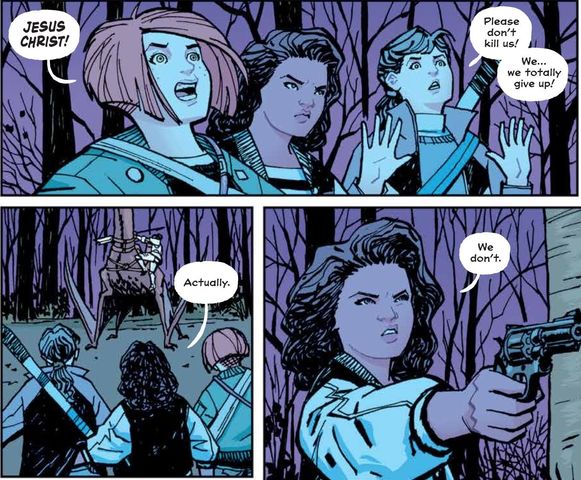 Tiffany goes from the avid gamer who wants to experience life more outside of her TV screen to inciting most of the action within the series, whether she is driving a car, leaping onto a monster’s back, table-topping a clone, or encouraging her friends to take a literal leap of faith into the unknown for answers. Her future isn’t the one she idealized, but her wit and bravery never die during her incredible journey — a far better fate than being killed to advance a white person’s journey. Erin and Tiffany are the types of agents of change and action heroines that women of color wish they had more of in genre as kids.

Mac rises from her broken family life and brings down her emotional walls to build perhaps her first solid friendships ever, yet she doesn’t transform into an unrealistic idealist and lose the cynical badassery that made fans love her. The series allows her and KJ to explore heavier themes and subjects like coming to terms with and revealing sexuality, the fear of rejection, and whether or not it is better to know when and how you will die. KJ’s romantic feelings for Mac, along with Mac’s own sexual curiosity — masked by learned homophobia —  shows how this challenging experience for LGBT youth sadly hasn’t changed much over the past 30 years.

The pair share several intimate moments where they discuss changes in their bodies, life philosophies, and what it means to live with no regrets. In the end, there’s a bittersweet sadness as they face the inevitable moment that forces their story to come full circle. Adult readers know that the passage of time may pull them apart, but their current choice to not just be paper girls but also friends really tugs at the heartstrings.

The girls may have ridden their bikes off into the sunset on print, but their journey is going to reset in live-action form. Per Deadline, Paper Girls will become a TV series on Amazon. At this point, there are no details about a potential release date nor casting, but it’s an excellent decision for several reasons. Stranger Things is likely in its home stretch, but '80s nostalgia is still at an all-time high, so this is an opportunity for Paper Girls to deliver a fresh new story with a throwback twist to stand out from remakes and reboots.

The series is absolutely gorgeous, thanks to artwork and coloring by Cliff Chiang and Matt Wilson, and virtually every panel begs to be brought to life. The issues flow together in a way that will work well for rapid consumption on a streaming service. It’s fun, frantic, well-paced, gritty, and sometimes confusing but consistently thrilling enough to usher in fans who want more girl protagonists in a coming-of-age fantasy series. And, of course, comic fans will be ready and waiting to see their favorite delivery girls leap into the adventure of a lifetime once again.

No one knows how much the show will deviate from its source material, but Paper Girls' intensely emotional comic ending, which brought the series full-circle, was an extremely satisfying cap to a phenomenal story. Saying goodbye to Tiffany, Erin, KJ, and Mac is like watching a beloved friend disappear into the horizon for unknown new adventures. This chapter may be completed, but there’s still hope for a phenomenal future.