Paranormal Activity, which started as a found-footage indie film in the vein of The Blair Witch Project, has quickly grown into one of the biggest modern horror franchises of the decade. Luckily, there's a nifty new infographic to help keep all those sequels straight.

For a story that started as a simple ghost story with a young couple, the Paranormal mythology has gotten pretty complicated as of late.

Broken down by film, character and year, this new infographic via Dread Central is a great primer to get up to speed before watching Paranormal Activity 4 when it opens Oct. 19.

Check out the infographic below, and finally make sense of all those criss-crossed timelines once and for all: 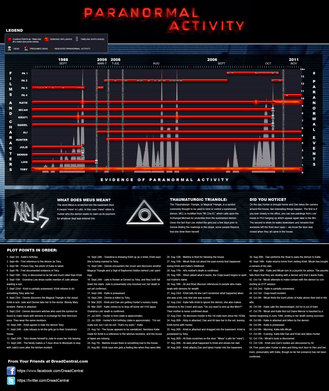 Have you kept up with all the Paranormal sequels as of late, or did you lose interest after the first one?