Park Chan-wook: Don't think of Thirst as a vampire movie

An internationally popular writer-director wants to tell a story about a priest's fall from moral grace. How best to put across such a story?

The biggest thirst traps of the decade
9 underrated, overlooked sci-fi and fantasy films of 2009

Thirst, opening today in limited release, stars Song Kang-ho (The Host) as Sang-hyun, the priest in question. He's a good man who submits to taking a secret vaccine that kills nearly everyone who takes it. In fact, he's the only survivor, but bizarre side effects soon reveal themselves. Sang-hyun gains strength, lusts after a longtime friend's beautiful but unhappy—and possibly abused—wife, Tae-ju (Kim Ok-vin), and eventually begins to imbibe blood and even kill when necessary. The film ranks as probably one of the hardest-R releases ever, bursting with violence, gore, nudity, language and more; in other words, we loved it.

"In all truth, it wasn't in my interest, and I didn't try at all to reinvent the vampire genre within the conventional traditions of vampire films," Park said last week during an exclusive interview in New York City. "I chose a vampire story in order to tell this [particular] man's story."

Following is more from our interview with Park, who spoke with the help of a translator.

In the context of your films, what kinds of storytelling tools are violence and sex? 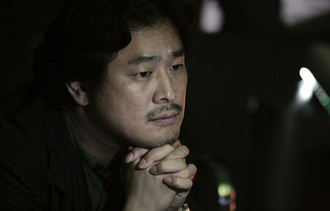 Park: When I was making Old Boy, the producer at the time was really concerned with incest scenes where a father and daughter would be having sex. The producer thought it would be very hard to release the film with that scene, and he wanted to take it out, but even with it intact there weren't any problems with it getting an R and getting released in the United States. So what I mean to say is that when I'm including scenes of violence or sex, it's not gratuitous. It's all done within a context of sincerity and desperation and all the different emotions that the main characters in my movies have. These scenes are the result of trying to express the emotions.

Every filmmaker wants every scene to work, but is there a scene or two in Thirst that you felt you had to pull off convincingly or the whole thing would fall apart?

Park: When I first had an idea for this film 10 years ago, there were two things that I wanted to get right. There were two things that I had, basically, that I was starting with: the process of the main character, and the question of how does he make a woman that he loves into a vampire. Those are two sequences that I think I wrote in one night, in one sitting, although it was 10 years ago. The rest of the story was all blank. I didn't have any other elements of the story apart from the past two. That, in turn, means that for the last 10 years I have been developing those sequences and everything around them. The sequence that actually made me want to make the film is the one with Tae-ju getting turned into a vampire. So that's the one I felt was the most important to get right. I thought it would become the core of the film, and it was important to me to realize that scene without detracting from the original idea I had for it. And I think I did that.

As audiences grow increasingly familiar with your work, how much harder does it get to scare them and to make them think?

Park: I would say it has become somewhat easier. Audiences, when they first experience my films, they tend to look at only what's on the outside, what's at the superficial level. They see the violence and the effects, and this is what may remain in their thoughts. I think that's especially true for someone who's never seen my movies and is seeing one for the first time. But if they're used to my films, then they come to them prepared and they're willing to look inside and what's behind everything they see.

It's just like when I saw Blue Velvet for the first time, the only thing I took from it was the ear that was cut off and all these insects swarming around it. That's the only thing I could think of for a few nights. But as I got to watch more and more of David Lynch's films I was able to get over that and see what was inside his movies.