We love Steven Spielberg, so when we heard that he wants to adapt Tintin, the beloved Belgian comic strip by Herge, we were intrigued.

Tintin isn't a household name in the U.S., but it's been hugely popular in the rest of the world for 80 years. Basically it's about the adventures of a young Belgian reporter (Jamie Bell) and his faithful fox terrier Milou (that's Snowy in English), and it spans genres from adventure to fantasy to mystery to science fiction, liberally dosed with humor.

The franchise has been Spielberg's dream project for decades, and the first of his planned Tintin films, Tintin: The Secret of the Unicorn, is now in production, with Spielberg directing. The movie is being made in 3-D motion-capture animation.

Spielberg may be credited as director, but he's not alone. Peter Jackson is producing the film with him. The film's co-star, Shaun of the Dead's Nick Frost, said that Jackson was always around to put his imprint on the film. That's potential for the best of Indiana Jones and Lord of the Rings in the same movie! Add to that the creative minds behind Shaun of the Dead and Hot Fuzz, and we're in.

"They co-directed, so Peter was in the studio on iChat every day," Frost said in an exclusive interview over the weekend in London, where he was promoting Pirate Radio. "So we had a laptop with Peter's face on, and he had kind of two, three cameras pointed at the action and pointed at us, too, so we could actually talk to him via some link or hookup. So it was odd. It was quite weird."

Frost plays the film's Inspector Thomson, with his Shaun co-star and frequent collaborator Simon Pegg (Star Trek's Scotty) as Inspector Thompson with a P. Their characters even look alike. 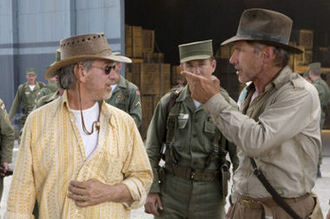 Steven Spielberg on the set of the last Indiana Jones film

The casting of Frost and Pegg gives us hope that the Tintin movie will have room for grown-up humor. Their frequent partner, Shaun director Edgar Wright, even co-wrote the script. Frost confirmed that Tintin will work on two levels.

"I think it's that Simpsons thing that children will get one thing and adults will get the other," he said

Don't expect Hot Fuzz genre riffs, though. Pegg and Frost said that they deferred to Spielberg and Jackson on Tintin. As uber-fanboys themselves, it's just a dream to be in a movie from not one, but two of the genre's heavyweights.

"Steven Spielberg, I think I'd probably come and clean the kitchen in his house just to hang around him," Frost said. "Peter as well. He was a really big advocate of Hot Fuzz. He really helped us out and hosted screenings and stuff down in New Zealand and was kind enough to let us hang out with him in the house. Just to actually be working with those people is such an eye-opener."