Last week it was "Olivia. In the lab. With the revolver." This week it's... "RoboCop. Time-traveling. On another freaky episode of Fox's Fringe."

No one on television kills people quite like Fringe, and tonight's episode, "White Tulip," offers a particularly puzzling mystery for the Fringe team when commuters suddenly die a "still death" when they and every electrical item aboard a train appear to have been drained of power.

At the center of the mystery is a powerful man with a terrible secret, played by the wonderful character actor and sci-fi fave Peter Weller (RoboCop). (Spoilers ahead!)

According to Weller, the character he plays, Alistair Peck, is actually "a romantic. It is a guy who is going back in time, and he's making some serious sacrifices in terms of other peoples' livelihood and well-being to get back to save his wife from dying in a ridiculous ... mistake that he made," said Weller during a conference call with journalists yesterday. "So he's trying to find redemption and go back to the only person that really means anything to him. It is a complete ... I don't know. It's just tremendously romantic and very moving. That alone was enough to make me want to jump on it."

While Weller admits he doesn't have a lot of time to watch prime-time television because he's finishing up his Ph.D. at UCLA (in Italian Renaissance history!), his wife is a big fan of Fringe. When the offer came in and he saw the script, he realized he couldn't turn it own.

"I thought it was fantastic, and it's just rare," he said, adding: "I just got to say it is rare that you see episodic television that has, like, a four-page acting scene. It is usually a lot of guns and cars these days, or a lot of police work, but this is different, man, unique and wonderful."

Weller acknowledged he enjoyed the time-traveling aspect of his character and the way it was handled on the series. "The 'What if we did this?', the whole thing outside of our sort of linear experience, and that's the great gift of science fiction," he said. "So it's fun. What I can tell you? It's just if you have any kind of inventive mind at all you go racing with it. I just think it was great. Also, particularly the way they're handling time travel, what the electrical field does around the person who is time traveling, sucking the energy out of the physical space where one lands, such as the energy gets re-routed. It is just fabulous to me. I don't understand science that much, I'm not a scientist, I'm not very good at mathematics, but science fiction is just extraordinarily imaginative trope."

Since then, he's become a fan of the show himself. "The reason why I love Fringe, and not just because I was in it, is that it goes past the surface adventure of science and sort of plumbs the responsibility and accountability of science fiction," he said. "Where the human being goes with it, what he has to suffer and what joy and also misery that he pulls out of messing with, if you will, fate or destiny, as the Greeks say, or a choice or the order of the natural world ... that's what Fringe does. It takes you a little bit deeper. As a matter of fact, in my opinion, a lot deeper than the usual science fiction program. It is all entertainment, but Fringe has an inquiry into what it means to be human along with this, and that's what really turns me on to this show."

For a guy who doesn't "understand science that much," he's managed to find himself at the center of a couple of science fiction's most iconic characters. He first caught our attention as the title character in The Adventures of Buckaroo Banzai Across the 8th Dimension, but he went on to play RoboCop in the 1987 movie and its 1990 sequel, which kept him on the sci-fi map. Some of his other genre projects include Leviathan, Naked Lunch, Screamers and TV's short-lived Odyssey 5. 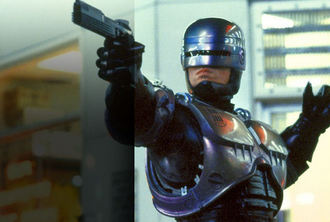 When it comes to the new version of RoboCop, Weller added that it is in the works with director Darren Aronofsky (The Fountain), and he hopes the project does well. "He's a gifted director," said Weller.

However, when it comes to the reboot, he believes it might be challenge for them to make a better movie. "I think the movie will probably be good," he said. "I just have to say RoboCop 1 is hard to beat. You've got that director, Paul Verhoeven, and you've got those writers, Edward Neumeier and Mike Miner, and the combination of action and myth and humanity and humor, all those things wrapped into one in a perfectly constructed ... You know, the construction of that script was perfect. I don't think they're going to do anything better, but I certainly wish them well to do something as good."

When it comes to the original RoboCop, "I was happy to do it and happy to leave it," he said. "It was like Dean Martin and Jerry Lewis. They were happy to get together and happy to part, 'cause they went on their own way. I went off. I left RoboCop to do Naked Lunch. And I'm very grateful to everything that RoboCop brought me, particularly a large listening amongst young people in regards to education and making some sort of contribution to education or difference to education, because young kids will listen to me because of that film."

As for what's next for Weller, he's directing a movie called The Meaning of Nowhere. After that, he said, he'd love to direct an episode of Fringe if it could be worked out. "I would love to direct for them," said Weller.