The original Red Dawn is one of the greatest action flicks of the 1980s, and many fans have wondered how much of that charm would survive the transition into the upcoming remake. Judging by a new pic from the reboot, it seems at least one classic scene has made the cut.

The tale of a ragtag group of high-schoolers who lead a rebellion in an occupied United States, the original is a true classic of alt-history war flicks. The scene in question is an ambush on enemy forces, which ends with a young man—rifle in the air—shouting "Wolverines!" in defiance.

For reference, here's the original (at the end):

Now, in the new version, that classic stance has been passed down to Hunger Games co-star Josh Hutcherson, who has traded wilderness for a decidedly more urban backdrop. You can see him in the iconic pose in a set photo, released by RedDawnMovieNews.com: 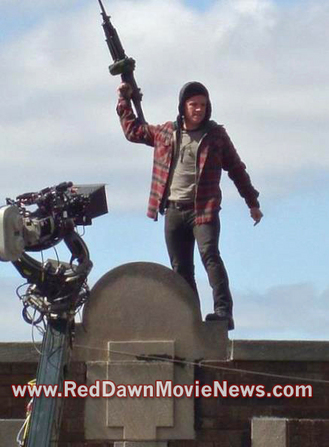 It may have been shot a few years ago and shelved, but the new Red Dawn is generating a fair amount of buzz with now-stars Chris Hemsworth (Thor) and Hutcherson in the lineup. When MGM ran into major money problems a few years ago, the film was delayed until someone actually had enough cash to release it.

Luckily, the no-name cast went on to be bona-fide stars the past few years, so this one could be a solid hit when it opens Nov. 21.

What do you think? Does the world need another Red Dawn?